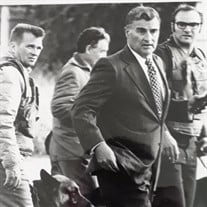 William A. (Bill) Sullivan died peacefully at home in Poway with family members on November 3, 2018, having celebrated his 99th birthday with family there on September 21st. He was preceded in death by his wife of 62 years, Mary (Thomas), his children Dickie, Lee, Don and Bob, his parents and his brother Joe. He is survived by his sons Chris (Sandi) and Ted and his daughter Martha; his grandchildren Brian, Alex, Ashley, Ben, Emily, Greg and Katie, 5 great-grandchildren, and mothers of grandchildren Pat and Lynne; his longtime caregiver, Jenny; his brother Don, nephew Don II (Seldon), nieces Carol (Paul) and Cathy and their mother, Katie; and a large extended family. Born in 1919 in Praise, Kentucky, the eldest of 3 sons to Chris and Goldie Sullivan, his childhood home was railroad hamlet Shelbiana, hard by the coal mines of Eastern Kentucky. He attended a one-room schoolhouse through 8th grade, then took the train to Pikeville Academy during the school year and to school in Elkhorn City for the rest of the year. An avid baseball and basketball player, he made the Appalachian Baseball League as pitcher in 1938-1941, during which he met Mary Thomas on a blind double date in Johnson City, TN and courted her until Pearl Harbor, after which he enlisted in the Marines. He was deployed to the South Pacific from Camp LeJeune and fought in Bougainville and Guadalcanal, earning a battlefield commission to Lieutenant. Mary also enlisted in the Marines and attended the first Women Marines boot camp in 1943 at Hunter College in NYC — they were married in their uniforms on leave in Kingsport TN on May 18, 1944. Mary returned to Quantico VA, where she commanded 200 other women Marines as a Lieutenant, and Bill returned to Camp Pendleton, attending Telecommunications Officer training and training other Marines. Mary was discharged in 1945 after she became pregnant with daughter Lee Anna, born in Johnson City TN early in 1946, after which Bill was discharged. Bill used the GI Bill to complete his Bachelor’s Degree at East Tennessee State University, and secured a job in Lake City FL as high school history teacher and basketball coach, where son Chris was born in early 1948. Very quickly, the local sheriff suggested he apply to the Federal Bureau of Investigation, which was recruiting WW II veterans, and he was hired and off to the FBI Academy at Quantico VA — starting a 27-year career in which he rose to Assistant Director. During Bill’s FBI career, he, Mary and their growing family would live in Indianapolis, Detroit (where Ted, Bob, Don, Dickie and Martha were born), Washington DC twice (Silver Spring MD), Butte MT, New Haven CT (Hamden), Tampa FL, Mobile AL, St Louis MO, Philadelphia PA, and finally Los Angeles, where he served as Assistant Director in 1974-75, and retired. He served as Asst Special Agent in Charge in Butte and Tampa, as Chief Inspector in DC, and as Special Agent in Charge in Mobile, St. Louis and Philadelphia. Bill’s FBI career was highlighted by several high-profile cases, including the Barbara Jane Mackle kidnaping in 1968, the hijacking of an airliner which landed in St. Louis in 1972, the Patty Hearst kidnaping in 1974; as well as being interviewed as a finalist for FBI Director in 1973 at the White House. He credited his wife, Mary, with the success of his FBI career, and often acknowledged the sacrifices she and their children made to support him. Bill next worked briefly during the first Jerry Brown governorship running the CA Alcoholic Beverage Control Board, which he recommended be eliminated in his first budget submitted for the agency. He then was hired by Hughes Aircraft as head of Corporate Security, from which he retired in 1985. It was then that Bill and Mary made their final move, to their dream house on the golf course in Poway, in Northeast San Diego County. It had a golf cart garage in the back, so that he could drive straight onto the course to indulge in the sport he had played since teenhood as a caddy and excelled in. And which he enjoyed playing with Mary through much of their marriage. Bill and Mary enjoyed travel to conventions and meetings of the Society of Ex-FBI Agents, of which he was a National Officer and Director. In the early 90s, their activity began to slow, as Mary’s diagnosis with Parkinson’s Disease took hold. Bill took over Mary’s role as caretaker of home and spouse, and in late 1998, Jenny Fleischmann joined their household to care for Mary until her passing in May 2006. Jenny was still at Bill’s side, along with daughter Martha and son Ted, when Bill passed peacefully in the home he and Mary enjoyed so well. He was the Manifestation of Optimism. Visitation on Monday, November 12, 2018 from 5-8 PM at Jeffers Funeral Service Downtown, 208 N College St, Greeneville, TN 37745. Graveside Services and Military Honors for William and (son) Bob Sullivan on Tuesday, November 13, 2018 at 11:00 AM in Andrew Johnson National Cemetery. Memorial Service in Poway in planning for after Thanksgiving. There will be a San Diego Celebration on Monday, December 10, 2018 from 11:00 AM to 2:00 PM at the Country Club of Rancho Bernardo. 12280 Greens East Rd San Diego, CA 92128 Please RSVP to: Martha Sullivan 858-945-6273

William A. (Bill) Sullivan died peacefully at home in Poway with family members on November 3, 2018, having celebrated his 99th birthday with family there on September 21st. He was preceded in death by his wife of 62 years, Mary (Thomas), his... View Obituary & Service Information

The family of William A. Sullivan created this Life Tributes page to make it easy to share your memories.

William A. (Bill) Sullivan died peacefully at home in Poway with...

Send flowers to the Sullivan family.