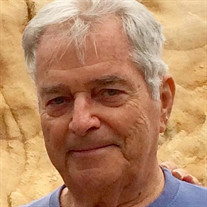 WILLIAM (BILL) RHODES On July 29, 2019, Bill Rhodes, 75, formally of Randolph, Ohio, passed away peacefully at home in San Diego, California. He fought a valiant 12-year battle against multiple myeloma. After getting a truly devastating prognosis 12 years ago, Bill researched vitamins and cutting edge therapies. He was willing to try many. With the help of his wife, exercise, diet, and prayer became the norm. His cancer became manageable and Bill made the most out of life by enjoying time with family and friends. After getting a job with Eastern Airlines in the 1970’s, Randolph High School’s football left guard (#61) and his family relocated to Southern California. While he may have lived most of his life in California, Bill’s heart was always in Ohio. His passion for his blue ‘67 GTO diminished a bit with life’s responsibilities. However, he managed one last hurrah in 2010 with a silver 1980’s T-top Corvette. If polka music wasn’t playing, vintage 50’s and 60’s music was. He could make a joke about everything. Bill’s smile and dry sense of humor will truly be missed. He was just the best guy. Bill is survived by his wife, Diane; son, Scott (Jen) Rhodes; daughter, Kelly (Ryan) Morton; five grandchildren, Harrison, Sean, Sophia, Hudson and George; sisters Janny (Kenny) Dew and Betty Stewart; and several nieces and nephews. Bill was preceded in death by his parents, Alvin and Catherine Rhodes, and brothers, Richard and Eddie Rhodes. A funeral mass will be held at St. Joseph Church in Mogadore, Ohio, on August 29, 2019 at 11 a.m. In lieu of flowers, donations may be made to Leukemia & Lymphoma Society

The family of William "Bill" Rhodes created this Life Tributes page to make it easy to share your memories.

Send flowers to the Rhodes family.