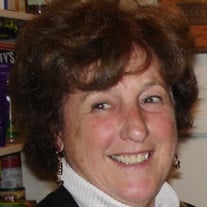 Vincia DeMaio Carlstrom passed away on January 27, 2016, following heart surgery. Vincia was born February 8, 1937, in New Haven, CT. Her exuberance, generous spirit, and organization were evident by high school, where she was Vice-President of her senior class, organized many school functions, and where she met her future husband, Lawrence A. Carlstrom (“Larry”). Vincia attended Albertus Magnus College, graduating in 1959 with a B.A. in Sociology. In August 1959, she and Larry were married and soon moved to Schenectady, NY. During the 1970’s, Vincia earned Masters Degrees in Sociology and in Social Work from the State University of New York, while at the same time raising three children. She went on to practice social work for 15 years, with a focus on children and families. Vincia also unhesitatingly supported Larry in his career, adeptly creating new family homes and making new friends in Sudbury MA, Columbus OH, and Madison WI. While in Madison, Vincia joined the Junior League and ultimately became President of the local chapter. In 2003, Vincia and Larry retired to Bonsall, CA, where Vincia became involved with the Fallbrook Garden Club and Friends of the Fallbrook Library. She served as the Friends’ President from 2011-2013. After her tenure as President, she volunteered at the Friend’s Bottom Shelf helping to raise funds to support library programs. Wherever she lived, Vincia appreciated nature. She deeply loved the lakeside home in Maine where she and Larry spent part of each summer for over 25 years, and where they hosted a steady stream of family and friends. Vincia was the indispensable center of family life during more than 56 years of marriage to Larry; organizing family gatherings, and keeping family members close even while they were disbursed across the country. Always generous and considerate, Vincia took great pleasure in maintaining long- held family traditions, especially during the holidays, and in teaching them to her grandchildren. Vincia is and will always be beloved by her surviving family and her many friends, including: husband Larry, brother James DeMaio, daughter Christine, sons Peter and Andrew, and grandsons Alexander and Christopher. Vincia was a vivacious woman of remarkable caring and talent who leaves an inspiration for all of us who remain behind. She will be dearly missed. A memorial Mass will be held in St. Elizabeth-Seton Roman Catholic Church in Carlsbad, CA on Friday February 12th at 10:00am. In lieu of flowers, the family would appreciate donations to Friends of the Fallbrook Library.

The family of Vincia D. Carlstrom created this Life Tributes page to make it easy to share your memories.

Send flowers to the Carlstrom family.