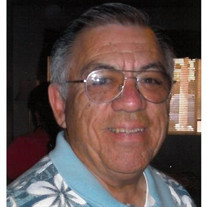 Obituary for Venancio "Benny" Herrera Venancio (Benny) Herrera passed away at Palomar Hospital in Escondido on Friday, August 18, 2017 after a long illness. Benny was born in Gonzales, Texas on April 1, 1937 to Vidal and Julia Herrera. Benny was the youngest of three brothers and two sisters. He is survived by his loving wife Anita Herrera, sister Esther Guerra, brother Vidal Herrera, sons Albert (Rosa) Herrera, Arthur (Ken Wetjen) Herrera, Andrew (Wendy Custer) Herrera and Anthony Herrera. He leaves behind three grandchildren, Albert Herrera, Victor Herrera and Cristina Lopez. Sister-in-law Esther Erro, nieces Sonia Guzman and Lori Erro as well as many out of town nieces and nephews. Benny moved to California after enlisting in the Marine Corps. He was stationed in Camp Pendleton and served four years. It was during his enlistment he met his wife to be, Anita, in Escondido at the La Tapatia restaurant where she was working. Benny and Anita married in St. Mary’s church in 1960. They made their home in Escondido and raised four sons. Benny was a true public servant working at Caltrans for 30 years and continued his public service after retirement. Benny became active in his home city of Escondido and served as president of the Park Place neighborhood for 13 years. He was involved in many neighborhood improvement projects and the Tri-Tip Fiesta. He received a special acknowledgement from the mayor of Escondido for his work. Benny enjoyed golfing and spending time with his friends. Benny was a devout Catholic and active in St. Mary’s church activities. Benny was a great husband, father and gentleman to all whom he came in contact. He will be missed by all. A funeral mass will be held on Thursday August 24, 2017 at 10:00 A.M. in the St. Mary's church at 1170 South Broadway, Escondido , Ca. 92025. Graveside services immediately following at Oak Hill Cemetery 2640 Glenridge Rd. Escondido, Ca 92027 In lieu of flowers, contributions can be made to St. Mary’s church building fund. Condolences may be left at Alhiser-Comer.com

Obituary for Venancio "Benny" Herrera Venancio (Benny) Herrera passed away at Palomar Hospital in Escondido on Friday, August 18, 2017 after a long illness. Benny was born in Gonzales, Texas on April 1, 1937 to Vidal and Julia Herrera. Benny... View Obituary & Service Information

The family of Venancio "Benny" Herrera created this Life Tributes page to make it easy to share your memories.

Send flowers to the Herrera family.