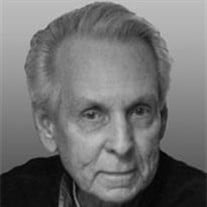 Valdo Richard Smith, a 43-year resident of Valley Center, passed away Sunday, October 6, at his home. He was 83 years of age. Born June 26, 1930, in Whittier, California, Val attended Fullerton Union High School. After two years of college, Val enlisted for a three year tour of duty in the U.S. Coast Guard, serving aboard the weather ship Klamath in the north Pacific, and receiving his honorable discharge in 1953. In September 1954, Val married Norma Jane Davis of Yorba Linda, California. After several years in Yorba Linda, Val and Janey, together with their two small children, moved to Casper, Wyoming. There Val spent ten years as an office manager for Shaffer T Val and Janey returned to southern California in 1969, settling in Valley Center on a small ranch where they maintained several acres of citrus trees. Val spent the remaining twenty-one years of his working life as bookkeeper, office manager, and ultimat Blessed with an active mind and eclectic interests, Val enjoyed sports, particularly the San Diego Padres, and liked to follow the ups and downs of the stock market. His fondness for travel inspired a three-month trip across the United States in 1993 and Val is survived by his wife of 59 years, Janey; two children, Valdo James Smith of Glendora, California, and Erin Lee Smith of Escondido; three grandchildren, one step-grandchild, and three step-great-grandchildren.

The family of Valdo Richard Smith created this Life Tributes page to make it easy to share your memories.

Send flowers to the Smith family.