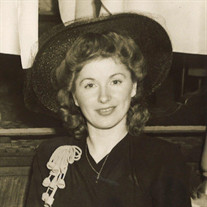 V. COZETTE “COZY” HESS 101 YEARS OLD Cozy did it—she reached 101 years the end of March 2015—and she lived alone until 100! Whenever asked the secret of her longevity, she laughingly responded, “The people in my family live so long, we have to shoot ’em!” And such was her bubbly, effervescent humor, which probably was the real secret. The other key might have been her stubbornness, characteristic of the “Missouri Mule.” She was born and raised in Missouri, the only child of doting, hard-working parents, and spent her childhood happily playing in the woods and river behind their house. At 16, she and her 18-year-old sweetheart, Clarke, went to Kansas and eloped—and then returned home. She would teasingly end the story by saying, “But it wasn’t a shotgun wedding. We just wanted to get married.” And they remained so for 71 years until Clarke died in 2002. They moved to California in 1937 and were a “happily-childless couple.” Later, after Clarke’s 3 years service in WWll, he co-owned an insurance agency and Cozy was, mostly, a housewife. They often traveled together to Tahiti (where they spent some time with the actor, James Mason) and other islands. Other times, they enjoyed cruise ships. However, Clarke didn’t often want to leave his business, so Cozy traveled most of the world without him—but always with a group. As she would say, “I wasn’t brave enough to go completely by myself.” She rode camels around the pyramids; walked the dusty, narrow streets of Damascus, Beirut, Lebanon, Jerusalem, etc.; visited the Vatican, France, Germany, and Austria, to mention a few places. But everyday was exciting for her. Once, when eating lunch alone, she was asked by Frank Sinatra to join him at his table with Ava Gabor and Joan Collins. Until the end, she lit up whenever she heard a Sinatra song. However, she also had a serious, almost obsessive, interest in politics. As a conservative Republican, she worked in various election campaigns for her local mayor, to participating in the Republican Presidential campaigns. She especially loved meeting candidates at their arriving planes and help escort them to their destinations. But she did not let the party dictate her thinking. During the Vietnam War, while in her 50’s and childless herself, she marched with mothers through the downtown streets of Los Angeles, proudly holding her protest sign. Since WWll, she always held “our boys” in her heart. In her later years, she often said, “I’ve had a good life—and I never expected any of it! Now, I’m happy just staying at home, although I wish Clarke was still here. And I look forward to going to Heaven so I can see him again, and my Mama and Daddy, and all my friends. I wish the good Lord would take me soon—but not too soon!” God answered her prayers. She passed away in her sleep Sunday morning, October 18, 2015. Everyone who knew her thought she “was a living doll!” A service will be held on Tuesday, Nov. 3rd , at Alhiser-Comer Mortuary, in Escondido. A viewing will be at 10:00, followed by a service at 11:00. She will then be buried in Inglewood, CA.

The family of V. Cozette "Cozy" Hess created this Life Tributes page to make it easy to share your memories.

Send flowers to the Hess family.