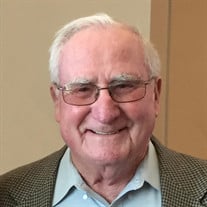 Tom Giesemann died peacefully on Saturday, September 1st, 2018, at his home in Escondido. His wife, Theresa, of 57 years preceded him in death. He was born in Queens, New York, to Ernest and Katherine Giesemann, the youngest and last surviving son of four children. Tom was raised in Soddy-Daisy, Tennessee until he joined the Air Force where he served in the Korean War and was Honorably Discharged. At his last duty station in Omaha, Nebraska, he met his wife Theresa at an Ice Cream Social on a blind-date. They were married, and Tom attended Iowa State University while starting his family, and graduated with a degree in Electrical Engineering. After college, Tom spent his entire career in the space industry, inventing, managing and business development of satellite communications and telemetry equipment. His long career took him and his family to Phoenix, Pasadena, Huntsville, back to Arizona, and finally for the last 32 of his career, to Loral/L3 Technologies in San Diego. Tom was well liked and respected by all his peers and worked for almost sixty years, retiring at 79. Tom’s real passion was his family, everything revolved around them and his very large extended family. In the early years, Tom would load his family of nine into the station wagon, and visit family in Tennessee, Nebraska, Washington DC, New Mexico, New York and Arizona. Later, as his children left the nest, setting out on their own, he travelled to see them in Arizona, Colorado, Iowa, Michigan, DC, and even with them as far as Guatemala, Costa Rica, Poland, Hungary and Czech Republic. Tom's wife Theresa was the primary cook although he did fancy himself a good cook with some 'specialty meals' like Sukiyaki, or his own recipe for Enchiladas, and of course barbecues! He loved the outdoors and occasionally went camping. Tom recently celebrated 29 years of sobriety and was a close friend and mentor to many in his AA community. He loved to read, often reading 2-3 books a week. Most of all, he loved to spend time with his family and grandchildren, for any occasion. Dad, Tom, Grandpa, Uncle, friend, mentor -- we all loved him and he loved us all dearly. He treated and welcomed everyone with respect. Tom had both an earnest giving nature and witty sense of humor that could make you chuckle. Tom is survived by his seven children: Mary Giesemann, Tom and wife Patti Pedersen-Giesemann; Joe and wife Andrea Giesemann; Barry and wife Yvette Giesemann; Amy and husband Paul Stastny; Michael and wife Leslie Giesemann; Patrick and wife Corinne Giesemann. Additionally, he is survived by his 11 grandchildren: Jessica and husband Adam Sisson; Alexandra and husband Thomas Fite; Corey, Brielle, Grant, Spencer, Max, Sam, Lucca (Stastny), Eli and Benjamin Giesemann. Tom is survived by his sister-in-law, Dorothy Slimp (96 years old) of Albuquerque, NM. Tom had two cats Lucy and Molly. He will be missed dearly by all. There will be a Viewing on Wednesday, September 12th from 4-8 PM at ALHISER-COMER MORTUARY, 225 South Broadway, Escondido, CA 92025, with the Celebration of Life Service at 5:30 PM. Website: http://www.alhiser-comer.com/ A private Committal Service will be held Thursday at Fort Rosecrans National Cemetery with Military Honors. In lieu of flowers please send donations to Doctors without Borders.

Tom Giesemann died peacefully on Saturday, September 1st, 2018, at his home in Escondido. His wife, Theresa, of 57 years preceded him in death. He was born in Queens, New York, to Ernest and Katherine Giesemann, the youngest and last surviving... View Obituary & Service Information

The family of Thomas Evan Giesemann created this Life Tributes page to make it easy to share your memories.

Send flowers to the Giesemann family.