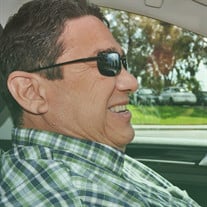 Escondido, California – Stuart Comer, 63, died Sunday, July 29, surrounded by his loved ones after a prolonged illness. He leaves behind his five children, daughters Nicole Lockrem, Megan Comer-Pearo and her husband Joseph Pearo of Escondido, and Elisa Comer of Sacramento, sons Corbin Comer and Addison Comer of Escondido, his five grandchildren, Madilyn and Joe Joe Pearo, and Peyton, Wyatt, and Kaidence Lockrem, his father, Bill Comer, his brother Carl Comer, many sister-and brother-in laws, nieces and nephews, and close friends. Born on July 25, 1955, in San Francisco, to Billy Ray Comer and Elisa Melgar Comer, he was a life-long resident of California, spending his last 41 years in Poway and Escondido. After graduating from Delano High School in 1973, Stuart went on to obtain his Funeral Director and Embalmer’s License from Cypress Mortuary College in Cypress, California. After working in his father’s mortuaries throughout his early career, Stuart purchased Alhiser-Comer Mortuary in Escondido in 1989 and grew the business to open Lakepointe Crematorium in Lake Elsinore, in 2001, where he worked until his retirement in March of 2018. Stuart was a long-time member Living Way Church in Poway, California, where he served as a Deacon for many years, and Selected Independent Funeral Homes where he served on the Board of Directors from 2000-2005. Stuart will be remembered as a generous and loving man, strong in his love for his family and his Savior Jesus Christ. He surrounded himself with his children and grandchildren who meant the world to him and whom he loved easily and whole-heartedly. He was always able to bring a smile and laugh to those around him and was known for his love of providing for his friends and family. He was always telling stories, reminiscing, and having spirited conversations about politics and religion. He had a keen interest in and knowledge of everything automotive – especially European cars. His love of music included all genres, from Christian to Country to Classic Rock, and he rarely did anything without some tune playing in the background. In his adult life Stuart always owned a dog – if not two – and they were as devoted to him as he was to them. He will be always be remembered for his sense of humor and easy laugh, and as a man who loved freely and sincerely. He will be greatly missed by those who loved him. A Visitation will be held at Alhiser-Comer Mortuary in Escondido on Sunday, August 5, from 2:00-6:00 PM. Stuart’s Funeral Service will be held at Living Way Church in Poway, California, on Monday, August 6 at 10:00 AM, followed by a Graveside Service at Oak Hill Memorial Park in Escondido with a reception to follow at Alhiser-Comer Mortuary.

The family of Stuart Comer created this Life Tributes page to make it easy to share your memories.

Send flowers to the Comer family.