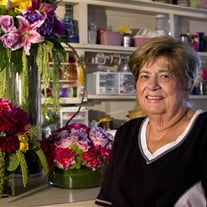 Rosemary Jean Gornick was known for her love of life and vivaciousness that shined through her extraordinary flair and passion for floral design. Rosemary was born in Chisholm, Minnesota, on January 4, 1929. She idolized her father who was the mayor of Chisholm and who owned a bottling plant; her mother was a homemaker. Rosemary was very outgoing and enjoyed being the "life of the party." She lived with her sister Dolly and her family in Escondido, California since 1959. She was like a second mom for her sister's eight children. Her life's work was committed to floral design and she achieved "Top 100" florist for her trend-setting, creative designs. She taught her four nieces the art and techniques for creating the special floral arrangements for which she became famous. Rosemary started 'Rosemary's Floral' with her sister Dolly and brother-in-law Peter Santrach on December 17, 1973, after more than 25 years in the floral business in Ohio, Minnesota, and California. She demanded the best from herself and expected those in her employ to do the same. Her incisive wit and unique leadership left a lasting impression with many of her employees many who considered themselves a member of the Rosemary's Family. Rosemary was infamous for one of her favorite reminders to anyone who worked in the Shop, "If you're not working you should be sweeping." She is survived by her brother, Ronald (and sister-in-law Carole) Gornick of Chisholm, Minnesota; her brother-in- law, Peter Santrach of Escondido, California; several nieces and nephews in California and Minnesota; cousins in Minnesota; and numerous friends. Services: A viewing will be held Tuesday, May 12, 2015 from 6 to 7:30 p.m. with a Rosary following at Alhiser-Comer Mortuary in Escondido, CA. Funeral Mass will be held on July 2, 2015 at St. Joseph's Catholic Church, Chisholm, MN on Thursday, July 2, 2015 at 11 a.m. with burial at Chisholm City Cemetery immediately following services. Donations may be made to the Chisholm Community Foundation, 104 - 3rd Ave. SW, Chisholm, MN 55719.

Rosemary Jean Gornick was known for her love of life and vivaciousness that shined through her extraordinary flair and passion for floral design. Rosemary was born in Chisholm, Minnesota, on January 4, 1929. She idolized her father who was the... View Obituary & Service Information

The family of Rosemary Jean Gornick created this Life Tributes page to make it easy to share your memories.

Rosemary Jean Gornick was known for her love of life and vivaciousness...

Send flowers to the Gornick family.