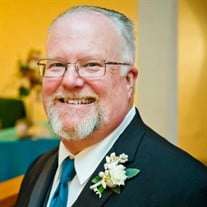 Ronny Gordon Duncan went home on June 11, 2020, following a 7+ month courageous battle with pancreatic cancer. He was only 64. He is sorely missed by his mother Virginia; his wife Deb of nearly 37 years; his children Stefanie (Sam), Ryan (Maureen) and Zach (Rachel); his grandchildren Ashley, Deagan and Mateo; as well as many other loving relatives, friends, and co-workers. Ronny moved to Escondido with his family as a young child and graduated from Orange Glen High School where he played trombone in the band and performed in musicals. He was a band major his senior year. Following high school, he and other former high school musicians formed a band called West Coast Express. He also enjoyed singing at parties and weddings for friends and relatives. During his 45 year relationship with Palomar Health, Ron was a Runner in Radiology and a Respiratory Care Practitioner for nearly 30 years, (including Director of Respiratory Care). In 2005 he transferred to the IT Department where he worked on the Electronic Health Record, later becoming Director of Applications. In 2013, the IT Department became part of Cerner Corporation, where he continued working with Palomar Health, most recently as Manager- Lead Application Architect, until his passing. Ronny is a man of many interests, skills, and talents: hunting, fishing, shooting, archery, camping, off-roading, bicycling, working on cars, coaching sports (including serving on the little league board as president), singing and playing the guitar and keyboard. He is a loving son, father, grandfather, relative, friend, mentor and co-worker - so patient, kind, and gentle. Ron has been such a loving, amazing, and caring best friend, partner and husband. We all miss him terribly, but feel so blessed to be a part of his life. While we mourn our loss, we rejoice that he’s gone home to be with our Lord and will no longer experience any pain or suffering. Rest in peace Mr. D!

Ronny Gordon Duncan went home on June 11, 2020, following a 7+ month courageous battle with pancreatic cancer. He was only 64. He is sorely missed by his mother Virginia; his wife Deb of nearly 37 years; his children Stefanie (Sam), Ryan (Maureen)... View Obituary & Service Information

The family of Ronny Gordon Duncan created this Life Tributes page to make it easy to share your memories.

Send flowers to the Duncan family.