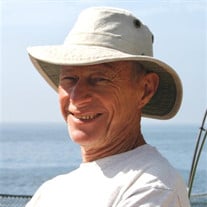 Ronald J. Vavra March 9 th , 1935-October 15 th , 2021 EL CAJON Ron Vavra passed away on October 15 th 2021, one month after suffering a heart attack and several strokes. It was such a surprise to his family and friends, as he had always led such a healthy and active lifestyle. Everyday he exercised, meditated and had a healthy diet. Throughout his life he carried a positive attitude. Even in the hospital, when asked how he was doing, he replied, “Never better”. One of his great passions was spending time in nature, having an especially keen interest in birds. He lived in El Cajon with his wife of 62 years, Gale. He fathered three sons, Mark, Kurt and Jay. He always loved and was so proud of them (and their wives; Chris, Eileen and Jean) and six grandchildren; Maya, Ellis, Shea, Trajan, Faye and Evan. His grandchildren affectionately called him “Viejo”. Ron grew up in Glendale California with his parents, William and Mabel, and his brothers, Billy and Robert. He went to Hoover High in Glendale where he was an outstanding track sprinter. He continued his education at Glendale Community College, San Jose State and Stanford. Ron and Gale married in 1958 and then moved to Lakeside, California where Ron was hired as El Capitan High School’s first track and cross country coach and as a P.E. teacher. In 1964, Ron was hired at Grossmont College as the first track and cross country coach, as well as a P.E and Adapted P.E. teacher. His teams at Grossmont and El Capitan were dominant, winning several C.I.F and state titles. Ron treasured his relationship with his fellow coaches; Bob Larsen, Jack Mashin and Jim Peabody and his athletes. Many of his athletes still kept in touch with “Coach”… he loved this. In 1970 Ron took a sabbatical leave with his family to Europe to learn the German sprint techniques. It was the “trip of a lifetime”, living in a VW van for 6 months while visiting 13 countries. All who knew this amazing man will miss him.

Ronald J. Vavra March 9 th , 1935-October 15 th , 2021 EL CAJON Ron Vavra passed away on October 15 th 2021, one month after suffering a heart attack and several strokes. It was such a surprise to his family and friends, as he had always led... View Obituary & Service Information

The family of Ronald Jay Vavra created this Life Tributes page to make it easy to share your memories.

Send flowers to the Vavra family.