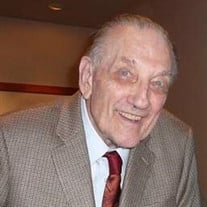 Roland Jackson, a longtime resident of Fallbrook, California, and Professor Emeritus of Musicology at The Çlaremont Graduate University, died on June 4, 2015, age 89. He was born in Milwaukee, WI. He was preceded in death by his parents Ruth and Martin Jackson, his beloved wife Brenda Montiel and a son Roland Jackson Jr. He is survived by three children, Martin Jackson, Karen Jackson and Ruth Jackson; sisters-in-law, Mary Montiel and Carol Kettela, brother-in-law, Jerry Montiel; four grandchildren, Sara, Jaimie, Michael and Judy Jackson, and many nieces and nephews. Roland’s parents had a profound impact on his life. His father was a high school teacher and the football coach. Roland played on the football team throughout high school. He first developed an interest in music from his mother, Ruth, an amateur pianist. Entering Northwestern University he received the Bachelor of Music in 1947 and the Master of Music in 1948. After graduation, he taught music for two years at Northland College, in Wisconsin. He then spent two years in Europe on a research fellowship, studying in Paris, Freiburg, Basel, and Florence. Roland then entered the doctoral program in musicology at the University of California, Berkeley, where he completed his Ph.D. in 1964. Roland loved music, and he dedicated his life to teaching students to understand and appreciate it. He taught at the University of Arkansas, Ohio University, and Roosevelt University, before his appointment in 1970 at The Claremont Graduate University (CGU), in Claremont, CA. Roland was instrumental in expanding the music program in the 1980s, establishing doctoral programs in musicology, composition, performance, conducting, and church music. He also founded the scholarly journal Performance Practice Review. Teaching at CGU from 1970 to his retirement in 1994, Roland directed many master’s theses and doctoral dissertations and documents. He led by model and suggestion rather than by insistence, and was always willing to put a student’s intellectual needs above his own. Music in Performance and Society: Essays in Honor of Roland Jackson, containing 25 scholarly essays by his colleagues and former students, was written and published in 1997 in his honor. As a music historian, Roland’s research and publications were far ranging, from computer music studies, early music, 19th century music, film music, music analysis, and performance practice. He continued his research activities into his retirement, and his last article, on the composer Arnold Schoenberg, will appear in July 2015 in Studi Musicali, a leading Italian musicology journal. Roland met his wife Brenda, also a musician and music educator, when she was studying at The Claremont Graduate University, and they were married in July 1975. (Brenda was Professor of Music at Palomar College from 1974 until retirement.) During the next ten years they traveled extensively throughout Europe on research trips. They were happily married for 39 years. In addition to his love of music, Roland also loved art, which he and Brenda collected. He enjoyed memorizing and reciting great poetry, and had a large repertoire of memorized poems, in English and other languages. Roland was open to all philosophical, religious and spiritual thought. He became interested in meditation, whether Zen or Hindu. Such thought seemed to him to touch more directly on the profound truths of love and caring. He lived in the present but permeated with the past. Roland often said “Mozart and Blake are my closest friends.” Services will be held on Friday June 26, 2015 at 10:00 a.m. at Alhiser-Comer Mortuary, 225 South Broadway Escondido, CA, 92025. In lieu of flowers, contributions may be made in Roland Jackson’s name to the American Musicological Society, Brunswick, Maine.

Roland Jackson, a longtime resident of Fallbrook, California, and Professor Emeritus of Musicology at The Çlaremont Graduate University, died on June 4, 2015, age 89. He was born in Milwaukee, WI. He was preceded in death by his parents Ruth... View Obituary & Service Information

The family of Roland Jackson created this Life Tributes page to make it easy to share your memories.

Send flowers to the Jackson family.