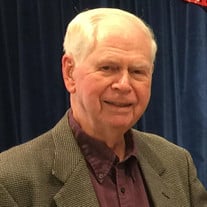 With trumpets sounding and angels singing, Pastor Robert &#8220;Bob&#8221; Rooks was welcomed into Heaven shortly after midnight on November 20, 2018. While there was jubilation in Heaven, there was shock and sorrow on earth! Whether you knew... View Obituary & Service Information

The family of Robert Rooks created this Life Tributes page to make it easy to share your memories.

Send flowers to the Rooks family.