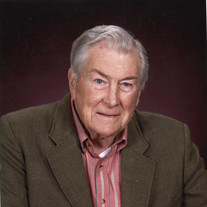 Robert Emmet Hayes of Rancho Bernardo has joined his wife, Alice, in heaven. “Bob” was born on November 21, 1920, in Los Angeles CA to the former Marion Weatherwax and Robert E. Hayes, Sr. He was shortly joined by sister, Jean, and brother, Bill. Bob’s mother passed away when he was 12 years old and the three children were raised by his paternal grandmother and aunt in San Gabriel. Bob graduated from both Loyola High School and Loyola University. He was a gifted athlete and natural leader. Bob served as president of his college senior class and was co-captain of the football team. Shortly after Bob’s college graduation, World War II broke out, and he volunteered to serve in the Navy. Upon receiving his “wings” as a Navy pilot, he briefly returned to Los Angeles to marry his sweetheart, Alice McCarthy, whom he had known since age 14. They were stationed in Corpus Christi, Texas, where Bob served as a naval flight instructor for the remainder of the war. After the war, his jobs included flying for Matson Airlines, working for Travelers’ Insurance Company, and Cosgrove and Company. In 1962, Bob was recruited by Equitable Life Insurance Company to serve at their home office in N.Y.C. Following that, he joined Metropolitan Life Insurance in New York. He then became Senior Vice President in charge of group insurance for the West Coast and relocated to his hometown of Los Angeles. His last position was as Senior V.P. of National Accounts in NYC. Bob retired in Dec. 1985 and bought a home in Rancho Bernardo to be closer to the family and many lifelong friends. Married to Alice for 64 years, he selflessly cared for her at home until she passed away from Parkinson’s disease in 2007. Bob was a devout Catholic; his faith was the guiding factor in his life. He and Alice were active members of St. Michael’s Church in Poway. They were the devoted parents of six children. Bob was preceded in death by Alice, his brother, Bill and sister Jean (by just three days.) He is survived by his six children: Kathleen Byers (Brad) of Fallbrook; Joanne Hayes of San Francisco; Mimi Frank (Dave) of Kailua, HI; Robert E. Hayes, Jr. of Long Beach; Janet Geehr (Ed) of Newport Beach; and Philip Hayes (Danielle) of Oakland. He also leaves 14 grandchildren and seven great grandchildren. “Tiger” Bob will be fondly remembered and desperately missed by all who knew and loved him. In her tribute to her uncle, Debe Lefevre relates, “The world has lost a truly great man, but Heaven has gained an amazing new citizen.” Services will be held at Old Mission San Luis Rey (Oceanside) at 1:30 on Monday, February 9. Burial will follow.

Robert Emmet Hayes of Rancho Bernardo has joined his wife, Alice, in heaven. &#8220;Bob&#8221; was born on November 21, 1920, in Los Angeles CA to the former Marion Weatherwax and Robert E. Hayes, Sr. He was shortly joined by sister, Jean,... View Obituary & Service Information

The family of Robert Emmet Hayes created this Life Tributes page to make it easy to share your memories.

Send flowers to the Hayes family.