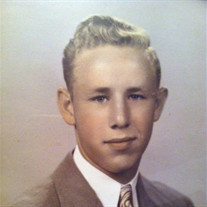 Robert L. (Bob) Thayer formerly of Escondido, CA and McCook, NE died peacefully in his sleep early on November 2, 2017. He was residing in Escondido at the time. Bob was born May 4, 1929 in McCook, the oldest of three children to Agnes and Lester Thayer. He spent his early years in Nebraska before his family moved to Toledo, Ohio where he attended and graduated from high school in 1948. He then decided to move back to McCook to attend college and was a member of the National Guard. In the summer of 1950 he enlisted in the United States Marine Corps.; graduated from MCRD in San Diego and was shipped off to Korea, where he fought in the battle at the Chosin Reservoir. Upon his return to the states after the Marines he moved back to Toledo, where he married his sweetheart Catherine Mulkey and they had two of their four children there. Bob always liked Southern California after spending sometime there while in the Marines. So he packed up and moved to Escondido in 1959. Here he spent the next 17 years and had two more children and worked as a milkman for Golden Arrow Dairy. During this time he was involved in many different activities; coaching youth baseball, golfing, bowling, softball, hunting and occasionally looking for gold. Bob wasn’t finished moving though. So, in 1976, he decided to move back to where it all started McCook, NE. He then spent the better part of 38 years working, hunting, fishing, playing golf regularly, following his beloved Cornhuskers, and occasionally following his passion of prospecting for gold. “The Good Life” For the past three years, because of health reasons, he has been in Escondido near his children. Bob is survived by his Wife: Cathy, three children: Denise (Jay) Semensow, Robert (Jody) Thayer and April (Jackson) Martin, all of Escondido; as well as, 11 grandchildren, 17 great-grandchildren and many relatives and friends. He is preceded in death by a daughter: Lynn Thompson; his sister, Rena Frantz of Grand Rapids, OH; and his younger brother, Richard Thayer formerly of Toledo, OH. There will be a Celebration of Life on Saturday, November 11, 2017 from 12:00 -3:00 pm at the Clubhouse located at Casa de Amigos, 1751 Citracado Pkwy in Escondido. He will be missed.

Robert L. (Bob) Thayer formerly of Escondido, CA and McCook, NE died peacefully in his sleep early on November 2, 2017. He was residing in Escondido at the time. Bob was born May 4, 1929 in McCook, the oldest of three children to Agnes and... View Obituary & Service Information

The family of Robert (Bob) Thayer created this Life Tributes page to make it easy to share your memories.

Send flowers to the Thayer family.