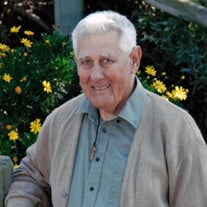 Robert (Bob) Michael DiGiacomo passed from this life to his glorious eternal home, February 22nd, just one month short of his 90th birthday. He was preceded in death by his wife of forty years, Anna Marie D’Emilio, who died September 26, 1989. A first generation Italian, Bob was born on March 31, 1928 in Lynn, Massachusetts to Anthony and Alice (Bossé) DiGiacomo and has no other siblings. He lived with his parents until the passing of his mother when he was 15; after which, he was raised by his Aunt. Bob entered the Merchant Marines in 1944 at the age of 16 because he wanted to serve his country during wartime and was honorably discharged at the end of WWII. A year later he met Anna, married in 1948, and they resided in Cranston, RI. Their first daughter, Lorraine, was born in 1950. Following in a long line of barbers on his father’s side, and having been trained to cut hair at a young age, Bob opened his first barber shop in 1957 - Wayland Barber Shop on Wayland Avenue in Cranston, RI. One thing that set Bob apart from most barbers in the early 1960’s was his continued interest in advancing the barber industry. He was the first in the state of Rhode Island to introduce hair coloring for men. As clientele and notoriety grew, he opened his second salon, The Van Dyke, on Rolf Street in 1961. Shortly after, he met Edmond (Pop) Roffer during a trade show in which he was the organizer, and learned the Roffler signature Skuplture-Kut, a method of cutting hair using a straight razor. Bob soon became nationally recognized for his talents and in 1965 was one of thirty to be certified as an educator for the International Barbers Union and U.S. Dept. of Labor. A federal grant was given to the union to begin a national pilot program, upgrading the image of barbers by providing advanced education and certification courses. He introduced this program in the state of Rhode Island and was the first to provide On-The-Job Training to barbers in salesmanship, shear blending, hair coloring, fitting of hairpieces, contouring razor cutting and men’s hairstyling. The program took off and other states over the US began providing similar education to its barbers, which ultimately revolutionized hair industry. In 1966, the couple had their second daughter, Robin, and their third, Anne, came two years later. In 1970, Bob was offered a promotion to become the head of national sales and education for Roffler Industries and his family was relocated to Coraopolis, PA. He worked out of company headquarters until 1977, at which time he was again relocated, this time to Virginia where he spent the next ten years training and educating national distributors in both Roffler and Framesi, helping them set up franchises and making them leaders in the men’s and women’s hairstyling industry. Bob gave everything to his career. To say he loved what he did would be an understatement. He made so many wonderful friends throughout his years with Roffler and was grateful for those who remained in contact with him till the end. In 1987 the company was sold and his position eliminated. He and his daughter, Robin, went into business together, selling exclusive lines to upper-scale salons throughout Virginia and Maryland. Their company, Salon Systems, was sold shortly after the death of Anna, who fought three years battling cancer. The death of Anna paralyzed Bob. He was never the same after her passing. A man filled with personality, life, and energy lost his best friend and confidant; it was devastating. At age 62, his life in the beauty industry came to an abrupt halt. In November of 1994, he moved to San Diego to live with Robin and her six-month newlywed husband, Mike. It was here that he rediscovered his Catholic faith, made a Cursillo weekend, and was set afire! He joined a men’s bible study and eventually became his son-in-law’s sponsor through R.C.I.A. Bob always wanted a big family and, ironically enough, he finally got it in the six grandchildren Robin and Mike gave him. He thrived on holding and rocking the babies, buying toys as they got older and watching them play. He even helped to taxi them to and from school. With nine in the household, there was never a dull moment and this grandpa loved it! Needing a bit of time to himself, he worked part-time from 1996 as a route driver, making deliveries for a local printer, until the company closed in 2006. In 2008 Bob began the ugly decline of dementia and spent his last ten years under the care of Robin, Mike, Mireya, his caregiver, and his grandchildren. It was a blessing he was able to remain living at home with his family, which is where he took his final breath, surrounded by their love. Bob leaves behind his three daughters: Lorraine Femino of Greenville, RI, Robin Saunders (Mike) of San Marcos, CA, and Anne Mills of Chesapeake, VA; his eight grandchildren: Kristen Areson of Greenville, RI, Rob Areson of Providence, RI, Mark, Stephen, Elizabeth, Laura, Christopher, and Mary Saunders, all of San Marcos, and his one great-granddaughter, Emily Areson of Greenville, RI. No matter what he was feeling, Bob always had one response when asked how he was doing: “I’m in good shape for the shape I’m in.” We pray this loving and generous man’s soul is in great shape and he’s enjoying being untied with his love, Anna, and they both are dancing in the presence of the King!

Robert (Bob) Michael DiGiacomo passed from this life to his glorious eternal home, February 22nd, just one month short of his 90th birthday. He was preceded in death by his wife of forty years, Anna Marie D&#8217;Emilio, who died September 26,... View Obituary & Service Information

The family of Robert "Bob" Michael DiGiacomo created this Life Tributes page to make it easy to share your memories.

Robert (Bob) Michael DiGiacomo passed from this life to his glorious...

Send flowers to the DiGiacomo family.