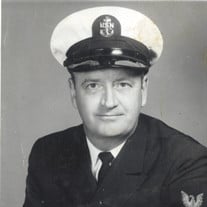 Robert D. Abrams, 89, of Escondido, CA passed away at home on Monday, October 30th, 2017 after losing his 10.5 year battle with Alzheimer's. Visitation will be from 11am - 2pm on Sunday, November 12th at Alhiser-Comer Mortuary, 225 S. Broadway,... View Obituary & Service Information

The family of Robert Dean Abrams created this Life Tributes page to make it easy to share your memories.

Send flowers to the Abrams family.