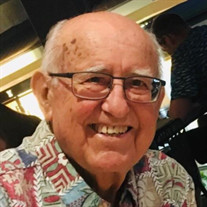 Richard Herbert Patterson November 6, 1933 - September 11, 2021 Richard H. Patterson passed away on September 11, 2021 in Escondido, California at the age of 87. He is survived by his loving wife of 65 years, Marilynn. Dick was born in Kansas City, Missouri on November 6, 1933 to the late Herbert James and Ferol Zenith (Eisenhart) Patterson. During the depression era, his family boarded a train and moved to Los Angeles, California. Dick attended Los Angeles High School and later graduated from Pasadena High School in 1951 when the family moved there. He attended Pasadena City College for two years where he became class president and then attended USC where he graduated in 1956 with a degree in business. He worked at Alpha Beta grocery store at night to put himself through college. After graduation, he married a beautiful redhead by the name of Marilynn Elaine (Jones) Patterson on June 22, 1956. Dick and Marilynn moved to Glendora, California, the Pride of the Foothills in 1957. Dick always had an appreciation of looking up and seeing the majestic San Gabriel mountains. Dick worked for Farmers Insurance as a claims adjuster and then went on for a law degree. He graduated from Southwestern Law School in 1965. He and Marilynn raised their family in Glendora and enjoyed traveling up the California coast in the summers with their trailer. One summer, they towed the trailer to Colorado. Passing through the California desert in 100 degree plus temperatures, Dick did what was best for his family by cranking up the heat in order to avoid the car engine overheating. Besides family time, Dick believed in giving back to his community. He was involved with the Jaycees, the Glendora Lions Club (where he served as president), and The Ramona Rotary Club. He was a devoted member and active leader of Glenkirk Church in Glendora and First Congregational Church of Ramona. He coached youth basketball and Little League teams for his two sons. Dick won a seat on the Citrus College Board of Trustees from 1970 - 1982 and served as their president for 4 years. Dick earned the Ed Kirkpatrick Award for his outstanding contributions to the youth of Glendora in 1973 and was given a letter of commendation from Los Angeles County in 1999 for his dedicated service to his community. A member of the State Bar of California for 55 years, Dick worked as an attorney for St. Paul and State Farm Insurance companies. Dick and Marilynn moved to Ramona, California in 1989, where he enjoyed tending to his many citrus trees, entertaining grandchildren, playing golf with his lunch bunch, and socializing with friends in the Friday Group. One of his favorite places to go was Kaanapali Beach, Maui where he traveled every summer with his family since 1977. “Another day in paradise” he would say and proclaim that night’s sunset was the “best he had ever seen”. Along with his parents, Dick was preceded in death by his brother Robert Patterson. He is survived by his loving wife Marilynn; one sister Marjorie Jane Hertzler; three children Richard (Melissa) Patterson of Pasadena, California, Tim (Lorna) Patterson of Simsbury, Connecticut and Donna (Stan) Poey of Carlsbad, California; and nine grandchildren, Taylor, Sarah, Charlie and Caroline Patterson; Mary, Colleen and Nev Patterson; and Lauren and Courtney Poey. A Celebration of Life will be held on a date to be determined. In lieu of flowers, donations may be made in Dick’s memory to the USC Norris Comprehensive Cancer Center or the American Heart Association.

Richard Herbert Patterson November 6, 1933 - September 11, 2021 Richard H. Patterson passed away on September 11, 2021 in Escondido, California at the age of 87. He is survived by his loving wife of 65 years, Marilynn. Dick was born in Kansas... View Obituary & Service Information

The family of Richard H. Patterson created this Life Tributes page to make it easy to share your memories.

Send flowers to the Patterson family.