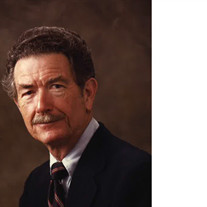 Former Chief Executive Officer of McMahan's Furniture Stores, community leader, beloved husband, father, grandfather and great grandfather, Richard a. McMahan, 87, passed away peacefully on Saturday, March 22, 2014 following a brief illness. Mr. McMahan was born in Fernandina Beach, Florida and grew up in Santa Monica, California. He attended Harvard Military Academy and Stanford University. Mr. McMahan was a veteran of World War II, serving in the Supply Corps of the United States Navy and ROTC units at USC and UCLA. He attended midshipman school at Harvard University. Following an honorable discharge after the war, Mr. McMahan attended Harvard Business School achieving a Masters of Business Administration. After graduation in 1948, he returned to California to join his father in the furniture business. Under Mr. McMahan's able guidance, McMahan's Furniture Company grew to over ninety store locations throughout six southwestern states. The retail business was able to expand into insurance and banking entities as well. Mr. McMahan's greatest source of pride in business was the longevity and satisfaction of his many employees. Many employees marked twenty, thirty and more years with the company and these milestones were always celebrated with great appreciation. In addition to business endeavors, Mr. McMahan was an active community leader, both in the Inland Empire and in San Diego, where the family and company relocated in 1975. Mr. McMahan served on the Board of Trustees of Pomona Valley Hospital, Foothill Country Day School, Scripps Hospital La Jolla and on the University Council of California State University, San Marcos. He was a lifelong learner and a generous donor to both K-12 schools and institutions of higher education. Mr. and Mrs. McMahan built "The McMahan House" on the campus of Cal State San Marcos as a center for community engagement for the new University. His leadership always shone through as he was often the "Master of ceremonies" at various service clubs or his children's school events. He was a career-long member of Rotary-International with a perfect attendance record. Mr. McMahan was also a jet-rated owner-pilot, who enjoyed flying for business and leisure in both single and twin-engine craft. Mr. McMahan met and married the former JoAn Sykes in 1950. The couple built their family along with their business and had a son and two daughters. After retirement, Mr. and Mrs. McMahan enjoyed many years of travel to all parts of the world, frequently with fellow Stanford alumni. In addition to many wonderful trips to Europe, they made several safari trips to Kenya and especially liked fly fishing in Idaho, Colorado and Alaska. They enjoyed many happy years of golf at Pauma Valley Country Club where they made their permanent home. Richard A. McMahan is survived by his loving wife of 64 years, JoAn; three children and their spouses; many grandchildren and great-grandchildren. He also leaves behind a brother and a sister and a great many friends, colleagues and business associates. Private services have been held. In lieu of flowers and because of his dedication to education, we suggest a donation to a school of your choice.

The family of Mr. Richard A. McMahan created this Life Tributes page to make it easy to share your memories.

Send flowers to the McMahan family.