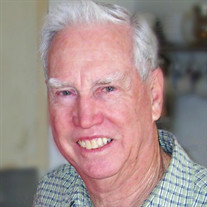 Richard Carleton Donovan, 83, died February 21, 2018 at the Pomerado Hospital in Poway, CA, following a stroke and pneumonia. He leaves his wife of 56 years, Mary Alice Donovan; his brother Michael; his five children: Diane (Bob) Brockob, Joanne (Dave) Deaton, Karen Donovan, Daniel Donovan and Sean (Inez) Donovan; fourteen grandchildren; one great grandson; and many nieces, nephews and cousins. Born in Nyaung Hla-Yenangyaung, Burma August 15, 1934, and raised in Long Beach, CA, he attended Wilson High School, graduating in 1952. After graduating from CSU Long Beach in 1955 with a BA in Physical Education, he enlisted in the US Army, serving in Korea until 1957. A second stint at CSU Long Beach brought him to his lifelong occupation as an accountant. He graduated from CSU San Jose (BA with Honors) in accounting in 1967. He met his wife, Mary Alice, at the Ave Maria Club in Long Beach, and they were married in 1961. Richard worked as an accountant and controller for Ameron International Corp. for 34 years, beginning in Southgate, CA, later transferring to Honolulu, HI, later to Fremont, CA, and back to Southgate. He left the company in 1993 to help with his wife’s travel business, Donovan Travel, and to spend more time traveling the world with her. Richard was an excellent pianist and loved playing for his family and friends. He also loved baseball and was on the Long Beach State baseball team during their very first season in 1954. He even scored the team’s first run. He was an avid golfer and made five holes-in-one in his lifetime, a remarkable achievement. Richard was also a dedicated community member who was very active in the Cerritos Optimist Club for more than 30 years. Richard’s Catholic faith was an integral part of his life, as his commitment to daily communion for many years proved. The Funeral Mass will be held Friday, March 2, 11 AM at Resurrection Church, 1445 Conway Dr., Escondido, CA 92027. Rosary to precede the Mass at 10:30 AM. Reception immediately following the Mass at the Parish Reception Hall. He will be interred at Miramar National Cemetery in a private ceremony. In lieu of flowers, please offer a Mass for the repose of his soul from one of these sites: http://bit.ly/2ozdgOu or http://bit.ly/2oz6sjI

The family of Richard Carleton Donovan created this Life Tributes page to make it easy to share your memories.

Send flowers to the Donovan family.