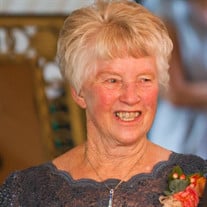 Rena Dragt de Jong was called home by her Lord and Savior, Jesus Christ, at the age of 89 on May 5, 2021 in Escondido, California. She was born on July 3, 1931 in Uitwellingerga, Friesland, The Netherlands. She was one of ten children born to Geert and Jeltje Dragt. Rena immigrated to the United States with her entire family, in 1950, at the age of 18. The family went into the dairy business in the Escondido area. Rena worked for a time at the Bank of America until her marriage to Pete de Jong, also a Dutch immigrant. Pete and Rena met at the Escondido Christian Reformed Church and were married in 1957. Their marriage was blessed with seven children, whom they raised in Escondido and later, San Marcos. The family was involved in Hollandia Dairy. Rena was a wonderful mother, a gracious hostess, a great homemaker and a true helpmeet to her husband. Many visitors to their home were recipients of a cup of coffee with a sweet treat or a bowl of Dutch vegetable soup with a “broodje”. No one left their table hungry! She was involved in the Escondido Christian Reformed Church where she spent years as a counselor for the girls’ group, the Calvinettes. She was also active in the Mothers’ Club for Calvin Christian School. In her later years at the Escondido United Reformed Church, she was involved with Project Phillip, a Bible study program that helps people around the world, through correspondence, to understand God’s Word. She and Pete were blessed to be able to celebrate 63 years of marriage filled with much love and lots of adventures. They enjoyed camping, first in a tent and then with their motor home, throughout the Western United States. They enjoyed travel around the globe. And they visited their seven kids and spouses, grandchildren and great grandchildren with great regularity. Rena is survived by her children Theo & Jeanne de Haan, Arie de Jong, Gerrit & Hinke de Jong, Gilbert & Marjie den Dulk, Peter & Ingrid de Jong, Mark & Elsie Bousema and Sandra de Jong. She also leaves behind 34 grandchildren and 46 great grand children. She was dearly loved by all her family and the kids called her “Oma”. Rena was preceded in death by her husband Pete, their youngest son, William de Jong and their daughter in law Carol de Jong, also a grandson and a great grandson. She also leaves behind her sisters and their husbands Edna & Ed Brower, Nellie Bosman and Grace & Cor Prins and her brothers and their wives Harold & Jeanette Dragt, Henry & Jane Dragt and Earl & Polly Dragt, also sister in law Rheta Dragt. She was predeceased by her brothers, Pete and his wife Ann Dragt, William Dragt, Andrew Dragt and brother in law, Frank Bosman. Visitation will be on Monday, May 17, from 4-6 pm at the Alhiser-Comer Mortuary 225 S. Broadway, Escondido. A private family graveside service will take place at Oak Hill Memorial Park. Memorial Services will be held on Tuesday, May 18 at 10:30 am. at the Escondido United Reformed Church 1864 N. Broadway, Escondido. The service will be followed by a luncheon at Melrose Ranch 16757 Old Guejito Grade Road, Escondido. The family suggests that memorial donations be made to Project Phillip, 1 Bible League Plaza, Crete, IL 60417 or your favorite Christian school.

Rena Dragt de Jong was called home by her Lord and Savior, Jesus Christ, at the age of 89 on May 5, 2021 in Escondido, California. She was born on July 3, 1931 in Uitwellingerga, Friesland, The Netherlands. She was one of ten children born... View Obituary & Service Information

The family of Rena Dragt de Jong created this Life Tributes page to make it easy to share your memories.

Rena Dragt de Jong was called home by her Lord and Savior, Jesus...