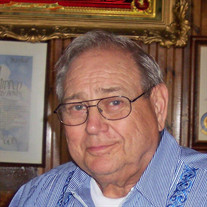 History/Obituary Paul Cecil Dennies passed away in his sleep at the Casa de Campañas in San Diego after a long battle with COPD. He was born to Sally (Sarah) and Paul Clark in McVeytown, Pa.; joining sister, Barbara. After his dad’s early passing, Paul and his Mom settled in Newport, RI in 1930, while Barb battled polio in the hospital. The family grew to include Corinne and Richard Jr., after Sally married Richard Dennies 7 years later. Paul graduated from high school at 15: he obtained his engineering degree from the University of RI. He did 2 tours in the Navy during the Korean War: he worked with sonar on subs in the Aleutian Islands, which affected his hearing years later. He married Lilliane Francesca Díaz Busó in Puerto Rico in 1952, during his second tour. They raised 6 kids in Granada Hills and Thousand Oaks, and life was busy. Paul was active in St. Paschal Baylon Catholic Church, Indian Guides & sports. He and Lilliane retired in Solvang, which the grandkids called “the Farm.” They were married until Lilliane’s death in 2007. Paul dedicated his work endeavors to Aerospace. His career spanned 5o years; and, he was lucky to work with many of the space race giants on the Space Shuttle Main Engine and the Supersonic Plane at Rocketdyne, Lockheed, Boeing and NASA. Paul’s hobbies included basketball, reading, coins, stamps and following the activities of his grandchildren. He was remarried to Sharlee Welsh 6 years ago: they lived at the Casa de Campañas in San Diego. Survivorship: Paul Cecil Dennies passed away quietly in his sleep, after a long battle with COPD. His wife, Lilliane, predeceased him in 2007. He is survived by his second wife, Sharlee; and by his 6 children and their spouses: Paul(Shauna,) Terri(Darryl Murphy,) David (Sharon Peck,) Dan, Paula (Edward Ptacek,) and Pamela(Douglas Hausmann), who live in San Diego, Irvine, North Ranch and British Columbia. He also leaves 11 grandchildren: Victor Dennies; Levi Supowitz; Johsua & Jordan Dennies; Sean (Nikki), Caitlin (Fern), Tessas & Dylan Ptacek; & Megan, Matthew (Maya), and Mike (Jenni) Hausmann; as well as 5 great-grandchildren: Sierra & Sadie Espinoza and Lily, Aria, and Atlas Hausmann. Lastly, Paul is survived by his 2 sisters, Corinne Pierce and Barbara Pyburn, his brother Dick, & his sister-in-law, Yolanda Díaz; a large contingent of nieces & nephews, stretching from San Diego (Noah (Kate & Chloe) to Oregon, Texas, Nevada, New Jersey, Florida, & Puerto Rico; and by Sharlee’s 3 children & their extended families. Flowers: Condolences of any kind are welcome. If you wish, in lieu of flowers, please make donations in Paul’ s name to the National Alzheimer Association. https://act.alz.org/site/Donation2?df_id=32112&32112.donation=form1&_ga=2.256922255.505868518.1579032654-1394682681.1579032654 This link takes you directly to the Donation site. Or go to the main site and hit donation on the top line. https://alz.org

History/Obituary Paul Cecil Dennies passed away in his sleep at the Casa de Campañas in San Diego after a long battle with COPD. He was born to Sally (Sarah) and Paul Clark in McVeytown, Pa.; joining sister, Barbara. After his dad&#8217;s... View Obituary & Service Information

The family of Paul Cecil Dennies created this Life Tributes page to make it easy to share your memories.

Paul Cecil Dennies passed away in his sleep...

Send flowers to the Dennies family.