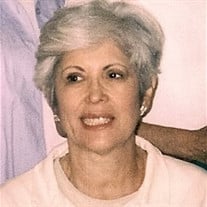 Patricia spent most of her days wearing wings on the lapel of her uniform, flying the friendly skies. On May 20, 2014 she earned her permanent wings and now flies through the heavens. Pat arrived in Escondido, CA on April 25, 1940, to her parents Gilbert & Catherine Reyes. She grew up in Escondido alongside her three sisters Gloria, Jeanette, and Louise. Pat attended St Mary's school and graduated from Escondido High School in 1958. In 1962 Pat joined her sister Gloria, landing a career as a flight attendant with American Airlines. Thus allowing for many years of travel & adventure around the world and U.S. Years later followed a new adventure with the arrival of her only child, her daughter Vanessa Lynn. Pat raised her daughter in Escondido in a tight knit family surrounded by the love of her mother and sisters, aunts, uncles, and cousins. Pat was active in the community and spearheaded the revitalization of her childhood neighborhood of Los Arboles. Her determination and hard work were recognized by the City of Escondido when she was presented with the City Council Neighborhood Improvement award in 2000. After over 40 years of flying Pat retired from American Airlines Her days were then filled with caring for children that took to calling her Nani. She grew to love them as her own grandchildren: Cole, Cy, and Sara along with loving their mom Valerie as her own daughter. Vanessa and her husband Eric soon blessed Pat with her greatest joy and light of her life. Her grandson Sammy. Sammy said of his Nana, "Nana is my best friend." They spent their days together on walks, taking rides and tending to her garden. The last few years of her life Pat was faced with many medical obstacles, including a kidney transplant in 2011. She faced each challenge with a positive attitude and her chin up. She was admired by many for her unwavering strength and was often referred to as the "cornerstone of the family". Whenever anyone needed encouragement or advice, they went to Pat. She was always there to listen with a hug and a smile and managed to make everyone that needed her feel better. Patricia was a woman of faith. Her final departure to join her heavenly father took place on May 20, 2014. She will be sorely missed and leaves a hole in the hearts of all that loved her. She is survived by her daughter and son-in-law, Vanessa & Eric Ferris and her grandson Sammy. Her sisters Gloria Gorney, Jeanette Reyes & Louise Reyes. Her extended family Valerie Latimer and children Cole, Cy & Sara Latimer. Along with her neice & nephews, aunts & unlces and an endless amount of cousins. Services will be held for Patricia as follows: A viewing will take place at Alhiser-Comer Mortuary on Tuesday May 27 from 4-8pm. Church service will take place on Wednesday May 28 at 10 am, at St. Mary's church followed by a burial service at Oak Hill Memorial Park.

Patricia spent most of her days wearing wings on the lapel of her uniform, flying the friendly skies. On May 20, 2014 she earned her permanent wings and now flies through the heavens. Pat arrived in Escondido, CA on April 25, 1940, to her parents... View Obituary & Service Information

The family of Patricia Reyes Weakly created this Life Tributes page to make it easy to share your memories.

Patricia spent most of her days wearing wings on the lapel of...

Send flowers to the Weakly family.