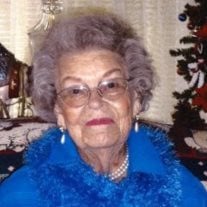 Patricia “Irene” Oleson won her victory over death on March 15, 2014. She passed peacefully into the arms of her Lord surrounded by a loving family. Born in Tahlequah, Oklahoma to William and Katie (Rattling Gourd) Weatherford. She spent much of her childhood in Cherokee Country with a large contingent of aunts, uncles and cousins. She was a member of the Cherokee Nation. In 1935 she moved with family to Tolllison, Arizona where she met and married Gerald W. Oleson. Two sons and a daughter: Jerry, Janice, and Donnie were born in Arizona. Son David was born in 1945 after the family relocated to San Diego in 1944 where Gerald was considered an essential worker during the war effort. In 1948 the family moved to El Cajon where they lived until 2005. After Gerald’s death in 1979 Irene lived alone until 2005 when she moved to Town & Country Mobile Home Park in Escondido to be near family. She did not aspire to be more important than what she was. She was happy being a wife, mother and homemaker, and “GiGi” to her 12 grand-children and 22 great-grandchildren. Her greatest joy was being with her family. She will be missed terribly, but we rejoice in knowing that she is safe in the arms of the Lord and united again with her loved ones who have gone before her. Visitation will be held from 4-6pm on Friday March 21st at Alhiser-Comer Mortuary in Escondido. Directions may be found on their website at www.alhiser-comer.com. Memorial Services will be held on Saturday March 22nd at Christ Lutheran Church, 7929 La Mesa Blvd in La Mesa, CA. at 2:30pm. Directions at www.christlamesa.org In lieu of flowers we suggest a donation in her memory to The Elizabeth Hospice, 500 La Terraza Blvd, Ste 130, Escondido, CA 92025 to whom we are deeply grateful for their loving care and compassion.

Patricia &#8220;Irene&#8221; Oleson won her victory over death on March 15, 2014. She passed peacefully into the arms of her Lord surrounded by a loving family. Born in Tahlequah, Oklahoma to William and Katie (Rattling Gourd) Weatherford.... View Obituary & Service Information

The family of Patricia "Irene" Oleson created this Life Tributes page to make it easy to share your memories.

Patricia “Irene” Oleson won her victory over death on March 15,...

Send flowers to the Oleson family.