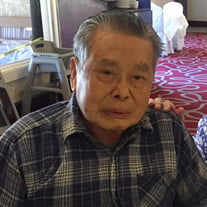 Norman Cheung Quon was born on April 27, 1927 in Chuk Hom Huey, located on the outskirts of Guangzhou (Canton) China. Leaving his mother in the village in 1938, he arrived at Angel Island in the Bay Area. After clearing immigration, he went to live in San Diego with his father, Wally "Lum" Quon. It should be noted that Norman did not see his mother again until 1952, when she was able to immigrate to the United States. Norman enrolled at Memorial Junior High , not knowing one work of English, learned the language quickly, and grated from San Diego High School in 1945. He was drafted 5 days later and was sent by the US Army Air Force to Fort Hood in Texas. After basic training, he was stationed first in Honolulu, Hawaii, later he was stationed in Guam. In the two years he served, he attained the rank of Sargent. After his military service, he used the G.I. Bill to earn a degree in Industrial Arts from San Diego State University. He met the love of his life, May S. Woo, and married her in Cleveland, Ohio. After a short stint as an employee of General Dynamics in San Diego, Normal decided to be a teacher and returned to San Diego State where he earned a teaching credential. Hew was employed by the Escondido Union High School District and stated teaching in the old Escondido High School on the hill on 4th and Hickory Street. His first classroom was a temporary classroom which was basically a tent with a wooden floor and a rolling chalkboard. He used to tell stories about the rainy season and how the floor in his room would "float". He moved to the "new" Escondido High School when it was finished and taught for 29 years there. He retired in 1987. He was in the classroom for most of his career, teaching drafting and architectural design. The last 10 years, he was the Work Experience Counselor for Escondido High School. Active in the community, Norman was a member of the Masonic Lodge #325 for over 50 years and was a proud 33 degree Mason. He was also a member of the Al Bahr Shrine for over 50 years. He was a member of the Community Reformed Church in Escondido and served in various positions for many years at the church. He was a man who loved his family above anything else. He loved to cook and garden. One of his favorite things to do was to go to a restaurant and have an exotic dish. Then he would go home and try to make his version of that same dish. His big passion was his yard, he enjoyed gardening and was very proud of all the various fruit producing trees that he had planted and raised to maturity. He was preceded in death by two of his children, Carolyn Jane Quon and Fay Jane Quon. He is survived by his wife of 67 years, May Woo Quon, and five children: Maryanna (Garth) Warner, Jerrie Quon, Sue Jane Quon (Rene Chacon), William Quon (Nikki), and Norma Quon (Lyman Chan). He also has six grandchildren, Thomas Warner, Tony and Carolyn May Chacon, Nick and Doug Quon, and Peter Chan.

Norman Cheung Quon was born on April 27, 1927 in Chuk Hom Huey, located on the outskirts of Guangzhou (Canton) China. Leaving his mother in the village in 1938, he arrived at Angel Island in the Bay Area. After clearing immigration, he went... View Obituary & Service Information

The family of Norman Cheung Quon created this Life Tributes page to make it easy to share your memories.

Send flowers to the Quon family.