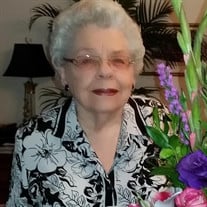 Escondido, Ca. - Norma Elizabeth (Betty) Rogers Cook, 93, passed away August 11, 2018 following a brief illness. Born July 16, 1925 in Bladen County, North Carolina to Tate Mosely Rogers and Elizabeth Anne (Bessie) Brown Rogers, “Betty” lived her teenage years in Whiteville, North Carolina. She graduated from Whiteville High School in 1942. She then attended Flora MacDonald College in Red Springs, N. C. graduating in 1946 with majors in voice and public school music. In 1943, while still in college, she married Linwood P. Cook, Jr. who served as a navigator and pilot in the US Air Force. After graduation, she followed her husband’s military transfers and they eventually were stationed at Harmon Air Force Base in Newfoundland, Canada where Betty began teaching piano at the elementary school. The principal of the school quickly recognized her teaching ability and special love for children and offered her the opportunity to teach in the regular classroom - thus, started a teaching career that lasted for 33 years. In 1960, Betty and her family moved to Newport News, Va. With this transition, she began using her given name “Norma” and promptly went to work teaching third grade at South Morrison Elementary School. She also worked with the children’s choir at her church, sang in the church choir, and contributed her lovely soprano voice to the Virginia Peninsula Choral Society. After retiring from teaching in 1990, she continued to share her passion for voice and piano as a piano accompanist and vocalist with various senior choir groups in the area. In late 2009, Norma considered moving from Newport News to Escondido, Ca. to take up residence at Meadowbrook Christian Retirement Village near the home of her daughter and son-in-law. Her one question before she committed to the move was “Would her new home have room for her piano?” Early in 2010, she and her piano settled into the newly opened community and she immediately went to work nourishing the residents with a monthly Hymn Sing. For the next eight years, Norma cultivated her life’s garden by producing a monthly Hymn Sing, culminating with her last Hymn Sing on her 93rd birthday, July 16, 2018. Norma was preceded in death by her late husband Major Linwood Paul Cook, Jr. (USAF, Retired) and their son Captain Linwood Paul Cook, III (USA, Retired). Her ashes have been interred with her husband’s at Fort Rosecrans National Cemetery in San Diego, Ca. A memorial headstone has been placed in the family plot in the Whiteville Cemetery in North Carolina. Survivors include son James Lloyd Cook and wife Antoinette Cook, daughter Norma Elizabeth Cook and son-in-law Dennis E. Alba, three grandchildren, and five great-grandchildren. Her beloved piano now brings joy and loving memories to her daughter’s home.

The family of Norma Betty Cook created this Life Tributes page to make it easy to share your memories.

Send flowers to the Cook family.