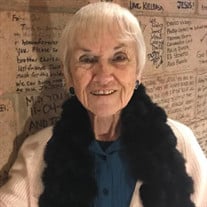 Mildred Lois Bielik Jun 12, 1926 - Dec 9, 2020 San Diego, California Mildred Bielik (Milly) passed away peacefully December 9, 2020 with her daughter, Suzanne Cummins at her side. Milly was born and raised in Torrington, Connecticut. She met her husband, Anthony Eugene Bielik (deceased Jan 20, 1990) and was married during World War II. Anthony (Tony) returned to Milly after four deployments overseas in the Pacific Theater. After the devastating flood of 1955 they moved to California with six of their children with an additional child being born in California. Milly was a devoted mother, devout Christian, a voracious reader; with the classics being her favorite novels and a talented, county fair awarded winning crocheter. She dedicated her last years making afghans for all her seven children, 18 grandchildren, 30 great grandchildren and one great-great grandchild. She also donated a multitude of her crocheted afghans, scarves and hats to Knit-a-Square, McDonald's House and several convalescent hospitals in San Diego. Milly devoted her early life to raising her children but in her 40's continued her education from Connecticut and started her dream job as a nurse in several convalescent homes. She continued as an LVN for Bixby Knolls in Long Beach, CA then moved to Las Vegas and worked for Homemakers Upjohn, a home healthcare company as a service coordinator. A consistent, loving caregiver all her life! Milly is survived by her sons, Michael Bielik, Thomas Bielik, Stephen Bielik, Robert Bielik, Anthony Bielik, Jr. and her daughters Suzanne Cummins and Lorraine Flores. She was preceded in death by her parents Loran and Emma Martin and sister Phyllis Manes. A "Celebration of Life" will be held at Fort Rosecrans National Cemetery at a later date where she will be laid to rest with her husband Anthony Eugene Bielik.

The family of Mildred Lois Bielik created this Life Tributes page to make it easy to share your memories.

Send flowers to the Bielik family.