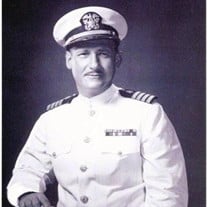 I read of a man who stood to speak at the funeral of a friend - He referred to the dates on his tombstone from beginning to the end. He noted that 1st came his birth and then came his death. But what mattered most of all was the dash between those years. For that dash represented all the time that he spent alive on earth and only those who loved him; knew what that life was worth. For it matters not, how much we own: the cars, the house, the cash. What matters is how we live – and love – and how we live our dash. Mel is a beloved husband of 67 years, a loving Dad to nine children, grandfather to 26, and great grandfather to seventeen. He was the “Home Work King” and always proud of his family and being in the Navy. He joined the Navy when he was seventeen in New York City, served as a radar man, saw action in the Pacific on the USS Bataan during World War II, and in later years helped to organize reunions for sailors that served on that ship. After the war ended, he attended Spring Hill College in Mobile Alabama, on the G.I. Bill. He graduated with honors in 1950. Mel then went on to attend medical school at Marquette University, with a wife, his first child, and a total savings of $58. He was a brave man who faced difficulties head on. He was a respected man, a leader that cared about those he worked with. He liked people and loved to teach Urology to the doctors in his department. He had a great sense of humor always remembering and sharing a good (and sometimes spicy) joke with all! He was Chief of Urology at the Balboa Naval Hospital, San Diego. He retired from the Navy in 1974 after 30 years and went into private practice in North San Diego County for an additional 18 years. He was Chief of Staff at Oceanside and Tri City Hospitals. He served as Chief Ranger for the Fraternal Order of Foresters as well as President of the Escondido High School Boosters Club. He sang with the Palomar Music Men and always kept a song in his heart. Mel was active with the Knights of Columbus in Alabama and California and was among the 1st ministers of the Eucharist at his then parish, St. Vincent de Paul San Diego. Mel and his family became members of Saint Mary’s Parish in Escondido, in 1974. Mel loved his decision to become a Catholic in his twenties. He participated in many activities in the church including making dinners for the Italian Catholic Federation, participation in Life in the Spirit Seminars, Marriage Encounters, and was a Prayer Group Leader, giving his time as freely as he could. He was a man of his word, always giving back to his community, thankful for the blessings God had bestowed upon him. He always taught his children to do what was right. He always loved his wife and children and believed in having a close knit family life. He encouraged his children to always work hard and be good citizens. He was a true American hero, proud of his service in the Navy, his love for his family, and church. He was an excellent “Mr. Fix It” around the house. He was kind and compassionate, a great listener who evangelized and led souls to Christ including a great-grandson in-law. As a dedicated doctor, he loved to say his patients had good results because he always prayed for them. It is obvious that Mel had an outstanding dash in his life and exemplifies how we should live our lives. Every one of us has a dash between birth and death. As we consider how to spend the dash in our lives, we would do well to follow the example of Melvin Rotner who throughout his long life touched many souls in a loving and positive way. So, think long and hard about this: are there any things you would like to change? Because you never know how much time is left that can still be rearranged. What if we slowed down long enough to consider what is true and real, always tried to understand the way other people feel, were less quick to anger, and more able to show appreciation, loved the people in our lives like we never loved before, treated each other with respect and kindness and more frequently dusted off that smile; how much more special would our dash be! Remember, that dash may only last a short while. So when your eulogy’s being read with a list of your life’s accomplishments, would you be proud of how you spent your dash?

I read of a man who stood to speak at the funeral of a friend - He referred to the dates on his tombstone from beginning to the end. He noted that 1st came his birth and then came his death. But what mattered most of all was the dash between... View Obituary & Service Information

The family of Capt. Melvin B. Rotner, MD. created this Life Tributes page to make it easy to share your memories.

I read of a man who stood to speak at the funeral of a friend...

Send flowers to the Rotner family.