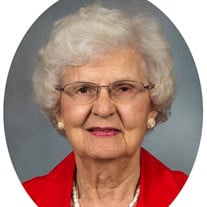 Mary Megyesi Nemeth was born on September 25, 1920 in Cleveland, Ohio to hardworking Hungarian immigrant parents. Even though they did not have much in the way of material wealth, she was blessed with godly parents who provided her with a legacy of Christian faith. She was married on May 10, 1941 to Charles, and they were blessed with two daughters, Mary Ellen and Diane. Always hard working she worked in the defense industry during the war and later became a secretary for over thirty years, nineteen of which were spent as an elementary school secretary in Shaker Heights, Ohio. Because of World War II, their early years of marriage were marked by separation including the fifteen months when Charles was a prisoner of war in Germany after his plane was shot down. After the war they picked up their life together and celebrated fifty-eight years of marriage. They provided a loving Christian home for their daughters and were active in their church. After Charles’ death in 1999, Mary moved to Escondido in 2000 to live with her daughter, Mary Ellen, and her husband Bob. Although, she always missed Charles, God was her strength and consolation. Her last years were spent enjoying family and new friends in Escondido, particularly at Escondido United Reformed Church. Yearly trips to New Hampshire provided time to visit with daughter, Diane, and her husband, Brent, as well as their family. Mary enjoyed her seven grandchildren and her fourteen great grandchildren who called her “GG”. During her last few months of her life, Mary had some health issues, but she remained mentally sharp and had a good sense of humor to the last days of her life. Her love for her Savior grew stronger as her days on earth grew shorter, and she trusted in the hope of the resurrection and the sure knowledge of a glorious future with him in heaven.

Mary Megyesi Nemeth was born on September 25, 1920 in Cleveland, Ohio to hardworking Hungarian immigrant parents. Even though they did not have much in the way of material wealth, she was blessed with godly parents who provided her with a legacy... View Obituary & Service Information

The family of Mary Nemeth created this Life Tributes page to make it easy to share your memories.

Send flowers to the Nemeth family.