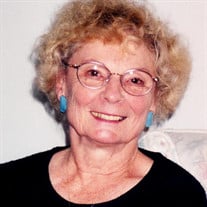 Marion Lea Wilkins Clark passed peacefully in her sleep on November 24, 2020. She was 97. Marion was born in 1923 in Chicago, Illinois, to Louis Emil Wetzel and Edna Anne Koestler Wetzel. Her older brother and sister, Burt and Jeanne, have since passed also. In World War II, Marion worked as a draftsman at the Jet Propulsion Laboratory near the San Gabriel Mountains. It was there she met Margaret Wilkins, the matchmaker between Marion and Lee (Margaret's brother who was away at war). They corresponded and sent photos. She married Leroy Morton Wilkins in 1947 after his return from World War II as a sergeant. Lee built their first house in Altadena, California, next to Marion's parents. They later moved to Thermal near Palm Springs, where Lee again built their house. Most of their life together, they lived in Escondido, California, and were members of Emmanuel Faith Community Church. Marion helped with hospitality at the church. They celebrated their 50th Wedding Anniversary at a party on a hilltop high above Escondido. The magnificent view was an appropriate symbol of a long and happy marriage together. After Lee died in 2000, Marion married Stanley Charles Clark in 2004. They lived at the Redwood Terrace Apartments in Escondido until Stan's passing in 2010. Marion was dearly loved by her devoted family and many friends. She is survived by her three daughters: Tena (Maury) Scruggs, Diana (Thomas) Petersen, Mary (Richard) Snead; her grandchildren: Anna Snead, Lydia Snead Johnson, Aaron Scruggs, Noel Scruggs, Paul Snead, Angelica Petersen; and her great-grandchildren: Lilly Snead, Kaylee Snead, Alice Johnson, Leroy Snead, Kai Scruggs. Marion loved beauty and created it as she helped design her house and gardens. She was a gifted artist, winning numerous awards for her oil paintings. She played the organ, excelled at cards, had a charming sense of humor, and loved jigsaw puzzles (earning her the title, "Puzzle Slayer"). In her last year and a half at her Grand Villa residence, she was given the title "Queen" from those who cared for her and loved her. She was an elegant woman of refinement and grace, soft-spoken, and had a gentle spirit. Her favorite Bible verse was Matthew 5:8, "Blessed are the pure in heart for they will see God."

Marion Lea Wilkins Clark passed peacefully in her sleep on November 24, 2020. She was 97. Marion was born in 1923 in Chicago, Illinois, to Louis Emil Wetzel and Edna Anne Koestler Wetzel. Her older brother and sister, Burt and Jeanne, have since... View Obituary & Service Information

The family of Marion Lea Wilkins Clark created this Life Tributes page to make it easy to share your memories.