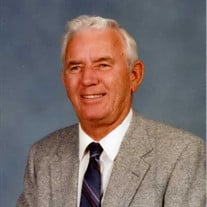 Marion E. Eubank beloved husband, grand-father, and great grand-father went to be with his Lord on Saturday, January 28, 2017, at the age of 90 years, 3 months, and 17 days. He was born on October 11, 1926 in Beggs, Oklahoma, the son of Emmett E. Eubank and Nora Elizabeth (Hand) Eubank. He was a World War II veteran, serving in the Army Air Force as a crew chief on a C-45 transport plane. He and his high school sweetheart, Georgia Katherine (Dunham) Eubank, were married 60 years prior to her death in 2006. Marion has been a long time resident of Escondido, he and Georgia first called it home in 1954. They were founding members of the Oak Hill Church of Christ in Escondido whose first meetings were held in their home. Marion was a General Building Contractor building homes and commercial buildings through-out the local area. His final project was construction of the Oak Hill Church of Christ building in 1986. He played guitar and enjoyed playing country and western music for his family and friends. He served his Lord in his daily life and passed his faith on to his children, grand-children and great grand-children. He was a kind man who always saw the best in others, and viewed the world with an optimistic heart. He had a great smile and a twinkle in his eye. He will be greatly missed by all who were privileged to know him. Marion married Anita (Whaley) Bender in 2006 and they enjoyed 10 years together. He is also survived by his children and their spouses: Connie and Gary Huntington of Lubbock, TX, Dan and Susan Eubank of San Marcos, CA, Ginger and Randy Bearden of Menifee, CA and Merry and Richard McDuff of Austin, TX. His eleven grand-children include: Wendy and Scott Miller, Amy and Christopher Anderson, Andy and Holly Eubank, Charity and Shane Frank, Krista and Dustin Smith, Heidi and Shane Sullivan, Tim and Susan Bearden, Heather and Joe Danesh, Sierra and Brandon Pierce, Shannon and Adam Brown, and Ben McDuff. Marion has been blessed to meet all of his 24 great grand-children. He is also survived by Anita’s children, Ron Bender, Robynn Martin, Mary Lanning, and Cheryl Breeden, her grand-children and family. Funeral services will be held at 1:00 pm on Friday, February 3, 2017 at the Oak Hill Church of Christ (1301 Oak Hill Dr. Escondido, CA). Visitation will be at the church at 11:30 am – 12:30 pm, prior to the service. Following the service, a private family burial service will be held at Oak Hill Cemetery. Dad, see you in Heaven!

Marion E. Eubank beloved husband, grand-father, and great grand-father went to be with his Lord on Saturday, January 28, 2017, at the age of 90 years, 3 months, and 17 days. He was born on October 11, 1926 in Beggs, Oklahoma, the son of Emmett... View Obituary & Service Information

The family of Marion E. Eubank created this Life Tributes page to make it easy to share your memories.

Send flowers to the Eubank family.