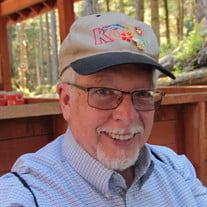 Mario was born on March 25, 1943 in Bogota, Colombia. In 1964, he left his home in Colombia to go to school in New York. After one cold winter on the East Coast, he was done. He decided to move to sunny Escondido, CA where his brother, Jaime lived. Mario and Coleene were married in 1971. He raised Coleene’s three boys as his own. Ken, Todd and Chris knew Mario as their dad. Mario had many interests. He enjoyed his time in The Peace Corp working as a language instructor in Peru in 1968. Photography was among the greatest passions of his life. Those who knew Mario often saw him with a camera around his neck. He received many awards over the years for his photographic work. Mario enjoyed a career at Hewlett Packard for 37 years. His love for technology fit right into the company he admired. He was always up on the latest computer technology and enjoyed helping others to understand their own devices. He became “Tech Support” for many friends and family over the years. He truly loved the many people that he came into contact with at HP. After retiring, he continued to be involved in the HP retirement group. All of the relationships he made at HP were a big part of his life. Mario became a United States citizen in 1969. He loved America. Though Colombian born, Mario was definitely an American. He loved to follow politics and give anyone his political opinion whether they asked or not. His love for country and community led him to working closely with the Escondido police and fire departments. He was proud to be a part of the Escondido community emergency response team, CERT. Mario’s faith was important to him. He made his Cursillo over 20 years ago and was active until his health failed. He was also active in Benedictus. Mario is survived by his wife of 47 years (Coleene), 3 sons (Ken, Todd and Chris), 5 granddaughters (Amy, Kathleen, Jessica, Courtney and Julia), 3 great grandchildren (Knox, Kami and Baby Jumpp), his brother (Jaime), 2 sisters (Gloria and Lisa) and many nieces and nephews. His faith was his life; HP and photography his passion.

Mario was born on March 25, 1943 in Bogota, Colombia. In 1964, he left his home in Colombia to go to school in New York. After one cold winter on the East Coast, he was done. He decided to move to sunny Escondido, CA where his brother, Jaime... View Obituary & Service Information

The family of Mario G. Jimenez created this Life Tributes page to make it easy to share your memories.

Send flowers to the Jimenez family.