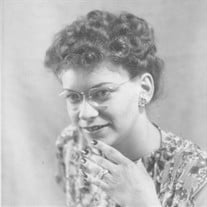 Luella Ann Yelle, 87, died December 5, 2015 in San Diego, California. She was born August 24, 1928 in Crookston, Minnesota. During high school Luella played the clarinet. She graduated from Pershing High School in Plummer, Minnesota in 1946. After high school she worked for the Post Office. During this time she was seriously dating a young solder named Walter Gerady. Luella had just returned from a double date with Walter and had been dropped off at her house when Walter and his friend Joseph Jaeger from Plummer were killed in a railroad crossing accident. This was quite a blow to Luella. After a while she did start dating again. About 1947 she drove to California with a friend to stay with her brother Eugene and his wife Arabelle. She had been dating Frank Yelle at that time and he begged her to come back to Minnesota. She did return to Minnesota and they were married on April 4, 1948. After they were married Luella went to work for the telephone company to help put her husband through school. Frank received his teaching degree and they moved to a little town near the Canadian boarder where Frank got his first teaching job. While they were living there their daughter Kathleen was born. In 1952 they moved to California where Frank got a job teaching in El Toro. They were there a year and then moved to Anaheim. While in Anaheim their son Kenneth was born. They then moved four more times throughout the years as Frank moved to different teaching jobs. Frank said he wanted to get experience teaching every grade. Frank eventually became an Educational Administrator. At that time they were able to settle down in West Covina, California. Luella went to work for the post office for the second time and stayed until she retired in 1988. After the death of her husband Frank, Luella moved to Escondido to be near her daughter. Luella was preceded in death by her parents, Wilfred and Catherine Morrissette; her sisters Doris Asselin, Dorothy Bolin, and Isabelle Gribbon; brothers Edward, Eugene and Maurice Morrissette. She is survived by sisters Beulah Peterson and Marie Stebe of Bemidji; sister-in-law Arabelle Morrissette; sister-in-law Marilyn Yelle of Garberville, CA; daughter Kathleen (Laurence) Flora of Valley Center, CA; son Ken Yelle of Elk Grove; Grandson Chris (Janelle) Flora of Temecula; granddaughters Melissa Flora of La Quinta, CA; Michaela Yelle of Grass Valley, CA; Serena (Peter) Holtz; five great grand-children and numerous cousins, nieces and nephews. A funeral mass will be held on December 10, 2015 at 2 PM Church of the Resurrection, Escondido, California. Burial will be at Queen of Heaven Cemetery in Rowland Heights, CA.

The family of Luella Ann Yelle created this Life Tributes page to make it easy to share your memories.

Send flowers to the Yelle family.