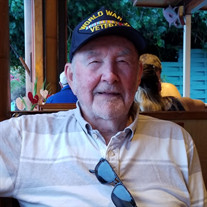 Louis Henry Winnard, born in Pittsfield on September 12, 1921, to Walter and Blanche Winnard, died on Sunday, February 16, 2020 in Escondido, CA. He was a man of many accomplishments. But before we talk about what he did, let’s talk about who he was. Lou was the oldest of 10 children and helped support his family during the Depression years. He was a devoted father to 7 children, his grandchildren and his great grandchildren. He was kind, generous to a fault and a man of absolute integrity. He was positive, an eternal optimist and an example of a good man to everyone. Lou was a loving brother to his siblings, uncle to numerous nieces and nephews, and the glue that held together his entire family. He was a friend to many and touched the lives of innumerable people. His world was all inclusive. In the mid-1960’s, at the height of the civil rights movement, despite objections within his company, Lou hired an African American engineer and then threw a housewarming party for the man and his family when they moved into his neighborhood. At age 21 he enlisted in the Navy and served in WWII. During his time of service he was given the opportunity to attend college, Harvard and Tufts, and he completed a degree in electrical engineering in just three years. Lou met his wife, Sophia Weidinger, in California after his discharge and they were married. They moved to Minnesota and from there he began his career as a manager of public utilities. In the mid-1950s he was recalled into the Navy and served in the Korean War. After Korea, he worked in Minnesota, Wisconsin, Connecticut, Florida and finally California, ending up eventually as head of Los Angeles Water and Power, the largest publicly owned utility in the United States. He was elected President of the American Public Power Association, and served on that board for several years. When he left LA Water and Power, Lou worked as a private consultant and during the 1980s and 1990s he served on the board of Energy Northwest in the Pacific Northwest and helped them solve the huge problems they were having with their nuclear power plant bond defaults. All along the way, Lou served on many local service boards, making significant contributions to his community. In 1991, he moved to northern California and that state became his home for the rest of his life. He settled in Windsor, wine country, and he loved it there. His circle of friends grew and there he created an expanded family. He took classes in winemaking and tried a bit of that on his own, before he decided that the big guys could do it better. He continued his community service, volunteering to support Iron Man athletes when the competition held in the area and serving on the county parole board. Lou loved to work with his hands and was an accomplished woodworker. He was a lifelong athlete, an avid sailor and a runner into his ‘70s. Until he broke his leg at age 96, he went to the gym three days a week. Lou loved the outdoors and he took his family camping in just about every state. He wanted his children to see this beautiful country which he, his father, brothers, and cousins had defended in WWI, WWII, and the Korean War. He also enjoyed fishing and hunting with his sons. He used to tell them that, “time spent fishing was not time wasted”. Lou worked very hard in his career, but emphasized the importance of being physically active in outdoor pursuits. In his later years he planted fruit trees, grape vines, roses, etc., and enjoyed tending them, even to the last years of his life. Lou is survived by his brother Philip Winnard and sisters, Alma Panetti and Anne Siemer; children Carol Walker, Robert Winnard, Marcia Winnard, John Winnard and Marie Gaines; 8 grandchildren and 3 great grandchildren. He is predeceased by brothers, Walter, Paul, James, Leo and Richard Winnard; sister Theresa Tanner, and two sons, Michael Winnard and Thomas Winnard. A Song Poem by his daughter, Marcia Winnard Some know him as Dad, and some as Lou. But his love it knows no bounds when it comes to me and you. Simple man with a heart of gold; sense of humor that’ll never grow old. How we love this man called Dad. He’s worked hard all his life; raised seven of his own. But he’s Dad to lots of children everywhere he goes. Whether he’s building dreams or castles in the sand; he’s always there to lend a helping hand. How we love this man called Dad. Some call him “Grandpa”, and some call him “friend”, but he never meets a stranger And his welcome never ends. He’d rather give than to receive, and every word of his you can believe. How we love this man called Dad. What can you say about a man who means so much to you? How can you ever begin to repay the things he’s given you?

Louis Henry Winnard, born in Pittsfield on September 12, 1921, to Walter and Blanche Winnard, died on Sunday, February 16, 2020 in Escondido, CA. He was a man of many accomplishments. But before we talk about what he did, let&#8217;s talk about... View Obituary & Service Information

The family of Louis Henry Winnard created this Life Tributes page to make it easy to share your memories.

Send flowers to the Winnard family.