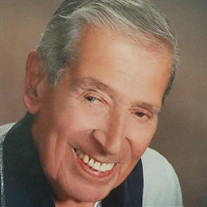 On December 17, 1929, Lloyd Anthony Torres was born at his parent’s home in New York City to Julio and Nina Torres. He graduated from the City College of New York in 1950 with a B.S. Degree in Education. A year later he enlisted in the Army and served until 1953. Lloyd began his teaching career as a Health Education instructor in 1956, later advanced to an Assistant Principal, then as Principal of P.S. 183, and retired from education in July of 1986. In 1959 Lloyd married his first wife, Dolores. They had three children: Lisa, Douglas and Diane, and were married for forty years. Dolores passed away in 1987. Lloyd moved to Escondido California in 1989 where he married his second wife, Elba, at St. Mary’s Catholic Church in Escondido. Eventually they started attending the Church of the Resurrection where he served as an usher. The two were also on a committee that prepared and sent out notices when the church had a need for volunteers. They regularly attended daily Mass and were involved in the church community. Elba passed away in 1999. On the first morning in January of 2000, Lloyd, after daily Mass, wished this woman who had been sitting in the pew in front of him for six months, a happy New Year. He had reached ahead and touched her shoulder to get her attention. At that moment a spark flew between his hand and her shoulder and the both became smitten. Lloyd and Marilynn were married in October later that year. In 2004 the two moved to Plano, Texas to be closer to Lloyd’s daughter Lisa and her family. While in Plano they became involved in the Catholic community of St. Elizabeth Ann Seton Parish. For about 8 of years they served as Sacristans for the 8am daily Mass. After Lloyd’s grandchildren completed college his daughter moved back to New York, giving no real reason for the seniors to stay in the area. In February of 2017 they moved back to California to be closer to Marilynn’s children and grandchildren. This allowed them to have assistance with their aging health. Lloyd was diagnosed with lung and stomach cancer in October 2017. He spent the final months at home under Hospice care. He is survived by his loving wife Marilynn; his children: Lisa Johnson, Douglas Torres, and Diane Torres, who live in New York; his sisters: Hazel Torres and Laura Stoddard, who live in Florida, and his sister Gloria Torres-Jones who lives in Colorado. He is also survived by several nieces, nephews, grandchildren, as well as several step-children, step-grandchildren, and step-great-grandchildren. Lloyd’s faith and pursuit of the knowledge of his faith were his passion. Rosary will begin at 9:30 am, Saint Mark’s Parish, 1147 Discovery Street, San Marcos, CA, with funeral Mass immediately following. Interment will be at San Luis Rey Mission, Oceanside, CA.

On December 17, 1929, Lloyd Anthony Torres was born at his parent&#8217;s home in New York City to Julio and Nina Torres. He graduated from the City College of New York in 1950 with a B.S. Degree in Education. A year later he enlisted in the... View Obituary & Service Information

The family of Lloyd Anthony Torres created this Life Tributes page to make it easy to share your memories.

Send flowers to the Torres family.