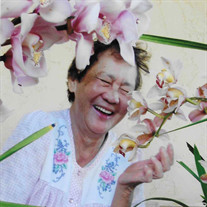 Leticia Gentolizo Abesamis or Lola, age 86, passed away peacefully on Monday, June 29, 2020, at Palomar Medical Center in Escondido. She was born on October 6, 1933, in Sorsogon, Sorsogon City, Philippines, to Luis Gentolizo and Gloria Ataiza. She worked as a Nanny displaying affectionate care to those she surrounded herself with including her children, grandchildren and neighbors. Leticia lived her life with laughter, joy, and love. She was a selfless, devoted mother, sister and grandmother who enjoyed spending each and every holiday and birthday with her family members. Every Christmas, she was considered our “Santa Claus” because she was always the center of attention who had gifts prepared and ready to hand out to each family member. Every day, Leticia enjoyed watching Price is Right, Wheel of Fortune, James Bond movies, Walker Texas Ranger and Eat Bulaga on her favorite Filipino network. She also had the biggest sweet tooth in the world where she would love to snack on McDonalds apple pies and Madeleines. She was a very religious woman who would attend Mass showcased in the Philippines on the television every Sunday morning. When Leticia goes outside, she loves to plant roses, orchids and bougainvilleas in the garden. Leticia is survived by her three children, Jeffrey Abesamis, Jocelyn Mattoni, and Jose Joel Abesamis; her two brothers, Orlando Gentolizo and Eduardo Gentolizo; her two sisters, Imelda Ingram and Realina Narido; her eleven grandchildren, Jefferson, Princess Gloria, Abigail, Dominick, Jorome, Dennisse, Joem, Erika, Lisa, Clint and Regine; and her three great grandchildren, Lucan, Thaddeus Alexander, and Nathanuel Eugene. A viewing is scheduled for Monday, July 6th at 3pm for family and 4pm for the public at the Alhiser-Comer Mortuary on 225 South Broadway, Escondido, CA 92025. Flowers and condolences may be sent to 2191 Johnston Road, Escondido, CA 92029.

The family of Leticia Gentolizo Abesamis created this Life Tributes page to make it easy to share your memories.

Send flowers to the Abesamis family.