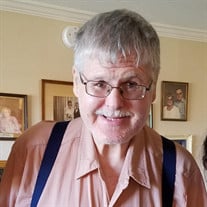 Leonard P. Godlewski was born August 29, 1958 in Hartford, Connecticut to Victor and Violet Godlewski. He liked to tell everyone that asked him for his birthday that he was born on the same day and same year as Michael Jackson. He was the youngest of three children. Leonard attended schools in East Hartford, CT, graduating from East Hartford High School in 1978. Leonard was disabled from birth with anoxic brain injury. He was in and out of special classes and State programs for the disabled. He suffered from anxiety attacks his entire life and has been on multiple medications. He occasionally had volunteer positions and jobs. He lived in different facilities for the disabled, and finally lived at home with his mother and father. After his father died he lived in CT while his mother lived half time in CT and half time in California. When his mother sold her house in CT, Lenny moved to Hemet CA year round. In 2017 Lenny and his mother moved to Assisted Living in Escondido, CA closer to his sister Susan. Leonard had a brain for retaining information. He could recite all the Presidents in order, tell you plots of many books he was reading, and tell you about many western movies and movie stars. Later Star Wars, Indiana Jones, and The Avengers became his favorite movies. His interests are history, true crime, conspiracy theories, and police scandals. He was an avid reader with favorite authors like Heather Graham, Lee Child, John Grisham, Stephen King, Dean Koontz, Michael Palmer, Sidney Sheldon, and many others. He was religious and read the Bible every day. In his twenties he was avid music fan and had a good vinyl collection. Lenny had a sweet disposition and a dry sense of humor like his father. He was kind, polite, and friendly. In CT and Hemet, CA he visited pubs and restaurants and knew all the waitresses and cooks who became his friends. The staff at Assisted Living loved Lenny. Leonard passed away on December 11, 2020 and leaves to cherish his memories his mother Violet, sister Susan, nieces Jennifer, Amanda and Sara, nephew Jeffrey, cousins Debra, Dana, Jennifer, and Sandra, and aunts, uncles, and friends.

Leonard P. Godlewski was born August 29, 1958 in Hartford, Connecticut to Victor and Violet Godlewski. He liked to tell everyone that asked him for his birthday that he was born on the same day and same year as Michael Jackson. He was the youngest... View Obituary & Service Information

The family of Leonard P. Godlewski created this Life Tributes page to make it easy to share your memories.

Send flowers to the Godlewski family.