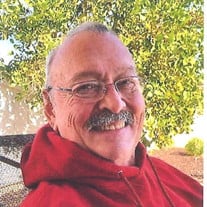 Lee K. LeMoine Lee Kent LeMoine, age 74, of Marshfield, WI, passed away on Tuesday, December 14, 2021, at home in San Diego, CA. Lee was born on April 20, 1947, in Spring Green, WI, the oldest son of Pat and Ken LeMoine. He was united in marriage to Barbara (Adler) LeMoine on May 20, 1972, in Marshfield. They lived in Monroe, WI, where they owned and managed LeMoine’s Shoe Store. They also lived in Cedarburg and Appleton, WI, Watersmeet, MI, and most recently, San Diego. Lee and Barb especially enjoyed the 16 years they spent on Birch Lake in Watersmeet. Lee attended Marshfield High School (class of 1965), University of Wisconsin, Stevens Point (class of 1971), and University of Wisconsin, Platteville (class of 1989). Lee served in the Army for two years during the Vietnam War. In addition to expanding the family shoe store business, Lee held many jobs including working as a computer programmer for 12 years. But, his biggest passions were woodworking, fishing, and family. He was a fantastic Grandpa who loved being silly with his grandkids. Lee is survived by his wife, Barb, his children Laura Magstadt (John), and Todd LeMoine (Alexa), grandchildren Kian (11) and Kayla (9). He is further survived by his brother Kim LeMoine (Phyllis) and sister-in-law Robin LeMoine, along with many other relatives and good friends. He is preceded in death by his father Ken, mother Pat, and his brother Gary LeMoine. The family appreciates the loving care Lee received in his final six months from the staff at San Pasqual Villa. A private celebration of life will be held in San Diego on Saturday, December 18. In lieu of flowers, please consider a tribute gift in his name to Alzheimer’s San Diego.

The family of Lee Kent LeMoine created this Life Tributes page to make it easy to share your memories.

Send flowers to the LeMoine family.