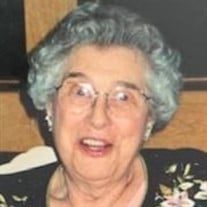 Lea Fletcher Fry, age 97, of San Marcos, California, formerly of Dayton and Englewood, Ohio, and Sun City West, Arizona, passed away Friday morning, October 23, 2020. Lea was born January 21, 1923, in Covington, Ohio, with her twin brother Lee, to Raymond Roscoe Fletcher and Elsie Rudy Fletcher. She grew up in Dayton, Ohio. Lea graduated from Fairview High School and attended Miami University in Oxford, Ohio, until she married Army Air Corps. Lt. William Stiver “Bill” Fry, early in World War II. She followed her husband to a number of bases across the country before he was sent to the Pacific Theater from the end of 1944 until December of 1945. Lea was able to finish her college degree later in life at Sinclair College in Dayton in 1982. Lea was a wife and homemaker. She and Bill had four children: Bill, Peggy, Susan and Richard. Lea also provided clerical help at her husband’s CPA practice. With Lea’s help, the accounting practice grew to include branch offices in several states. Bill and Lea lived in the Dayton area until the late 1980s, when they moved to Sun City West, Arizona. Bill died in 2002. They had been married 60 years. He had been the love of Lea’s life. A year later Lea moved to San Marcos, California, to be near to their daughter Susan and her family. Lea spent the rest of her life there. Lea was devoted to her family. She was also a devoted friend. She cared about people, and was always there when someone needed help. Lea was best known as an award-winning painter and for being the “Flag Lady” of Arizona for her years of presentations to school, community, and civic groups on the history of the American Flag for the Freedoms Foundation of Valley Forge. Her other interests included cooking, gardening, antiques, entertaining, furniture refinishing and genealogy. Lea was a member of her church, the DAR, the Colonial Dames, Daughters of Founders and Patriots, the National Flag Foundation, Aviation Trail, Tri-Tones Women’s Chorus, the Garden Club, Questors, The Dayton Women’s Club, Advance Club, and many other organizations. Lea was preceded in death by her twin brother Lee, her older sister Helen Peters, her parents Raymond and Elsie Fletcher, her husband William Stiver Fry, and her great grandson Quinn Michael Shipley. She is survived by her son William (Tamara) Fry of Erie, PA; her daughter Peggy (David) Kovacic of Urbana, IL; her daughter Susan (Joe) Minner of San Diego, CA; her son Richard (Penny) Fry of Nesbit, MS; and her niece Barbara Hooker of Auburn, CA. Lea is also survived by her nine grandchildren – Stephanie (Scott) Crowell, Julia (Dwight) Gilbert, Christine (Michael) Shipley, Valerie (Danilo) Peguero, Joshua (Maureen) Kovacic, Aaron Fry, Teddy (Holly) Minner, John (Brandy) Kovacic, Andrew (Jenna) Minner, - and great niece Dina (Scott) Bunce and great nephew Andrew (Naomi) Downey. Lea is survived by nine great grandchildren – Seth, Hannah, Damon, Dylan, Isaac, Keegan, Daniel, Soleia, and Skye, and great great grandson Jidenna. Lea was one of a kind, and will be greatly missed by her family and friends. A celebration of life will be held at a later date. Interment will be at Highland Cemetery in Covington, Ohio. The family would like to extend special thanks to the staff of Silvergate Retirement Residence and Silvergate Memory Care Suites in San Marcos, California, and to Cabrillo Hospice of San Diego, California, for the excellent care Lea was given. In lieu of flowers, memorials may be made to The National World War II Museum, 945 Magazine Street, New Orleans, LA 70130 or to The Alzheimer’s Association, 225 N. Michigan Ave., Fl.17, Chicago, IL 60601.

The family of Lea Fletcher Fry created this Life Tributes page to make it easy to share your memories.

Send flowers to the Fry family.