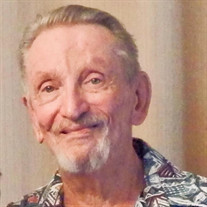 LAWRENCE ALLEN TEWES March 27, 1929-May24, 2020 Lawrence (Larry) Allen Tewes was born in Los Angeles, California to Myrna Field Tewes and Lawrence Augustus Tewes on March 27, 1929. He grew up mainly in Eagle Rock, a neighborhood in North East Los Angeles, and graduated from Eagle Rock High School in 1947. He attended college for three years. While at Eastern Washington College in Cheney, he was drafted. He proudly served his country during the Korean War as a Tin Can Sailor in the United States Navy aboard the U.S.S. Fechteler, and was Honorably Discharged in 1953. He met his wife Nancy (Nan) through mutual friends, and they were married October 8, 1955. Together they raised their family, one daughter and two sons, in the San Fernando Valley. He enjoyed many Family Beach Campouts, and was active in the El Cariso Golf Club, the San Fernando Elks Club, Sylmar Little League, the Y.M.C.A., and St. Mark’s Church. Larry had a thirty-five year career at Jet Propulsion Laboratory in Pasadena, CA. He was an instrumental part of the Surveyor, Ranger, Magellan, Galileo, Mariner, Seasat-A, Solar Transit Flight, and Artillery Defense projects. Larry was featured on the PBS program NOVA as part of the team that built the Voice Command Wheel Chair. Larry and Nan retired in Lake Havasu City, Arizona where he continued his passion for golf. They enjoyed boating on Lake Havasu, especially when their family would visit! His many activities included the Lake Havasu City Elks Club, Relics & Rods, and traveling with Nan throughout the U.S.A. His favorite trips were Alaska and Hawaii. After 18 years in Arizona, Larry and Nan returned to California to be closer to their family. He loved their many multi-generational family celebrations. For ten years Larry was an active member of the Escondido Champagne Village Golf Club, and Lion’s Club. He was a 56 year member of the Elks Club and 21 year member of the American Legion. At the age of 91, Larry passed away on May 24th, 2020. He was blessed with a long and happy life. Larry is survived by his wife of nearly 65 years Nancy, his children: Dana, Dale, Darryl, daughter-in-law Jody, 6 Grandchildren, their Spouses, and 16 Great-Grandchildren. A private ceremony will take place at Miramar National Cemetery in San Diego, CA. In lieu of flowers, a donation may be made to the following charities: Disabled American Veterans, American Heart Association, The Skin Cancer Foundation. May God Grant him Eternal Peace.

The family of Lawrence Allen Tewes created this Life Tributes page to make it easy to share your memories.

Send flowers to the Tewes family.