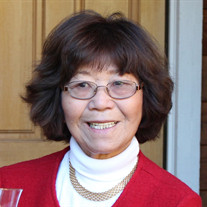 Kimiko (きみ子) Asato Cuthbert, loving wife, caring mother, and devoted friend, died at home in Escondido on St. Cuthbert’s day. Born in Okinawa to Choguki and Yoshi Asato, Kimiko grew up on the island during and after the devastation of WWII, which claimed the life of her father. She was raised by a great aunt and then her grandmother Kama Higa and older sister Yukiko Zukeran. She graduated from nursing school, becoming fluent in English along the way. One morning in 1968 she was helping a friend at a café when an American Second Class Petty Officer named Dave came in. She married David Charles Cuthbert Jr. in 1971, moved the same year to the United States, and became a proud citizen in 1981. The family settled in Escondido and remains there. Her sons David Allen and Michael Scott were born in 1973 and 1976. She sustained the family during innumerable long naval deployments and was always there for kids’ band practices and NCAL matches. In addition to nursing, she had a career in real estate, but her true vocations were her family, her Christian faith, and her beautiful garden. She loved the outdoors and especially the mountains. She rooted strongly for the Padres even in their worst years. Kimiko made many trips back to Okinawa to visit Yukiko and Chosho, their family, and friends. She enjoyed several visits to Italy where Michael worked. Her greatest delight, however, were trips to Seattle to spoil her grandkids. She lived her beliefs and passed secure in the truth of God’s promise. Kimiko is survived by her husband Dave, sons David (Tamara Tulou) and Michael, grandchildren Mikaela and Charles, brothers and sisters including Yukiko, and many nieces, nephews, and their children. A visitation on Wednesday, April 1 will take place at Alhiser-Comer Mortuary in Escondido from 5–8pm. A service will be held at the same location Friday, April 3 at 10am. A ceremony at Miramar National Cemetery will follow at 1pm. Memorial donations may be made in her name to the Gastric Cancer Foundation via http://tinyurl.com/KimikoC

The family of Kimiko Asato Cuthbert created this Life Tributes page to make it easy to share your memories.

Send flowers to the Cuthbert family.