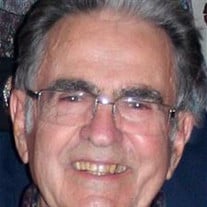 Julio A. “Terry” Taramasco, 94, of Escondido, CA, passed away Dec. 29, 2018, after a long battle with cancer, surrounded by his family. He was born Nov., 30, 1924, in Buffalo, NY, to Joseph and Josephine (Carlini) Taramasco. He married Louise Davoli July 2, 1950, in Los Angeles, CA. In 1953 he and Louise moved to Escondido, where he and two cousins started a mushroom farm, which is still in existence today. In addition to growing mushrooms, which he sold to local grocery stores such as Safeway and Rube Nelson, he enjoyed making his own wine in his home’s cellar. He served in the U.S. Army during World War II from 1943-44. He retired as a supervisor in 1983 after 30 years with AT&T. Besides his family his passions were gardening, bowling and cribbage. He is survived by his wife of 68 years, Louise, children Diane (Rich) Hunt, Michael (Helga Salm) Taramasco and Debra Taramasco, grandsons Tony Taramasco and Alex Wolfe, and numerous nieces and nephews. He was preceded in death by his parents and his sister Alda Curliss. A ceremony will be held at Miramar Memorial Cemetery at a future date. In lieu of flowers, donations to Eagles Nest Retirement Ranch in Escondido or Elizabeth Hospice are suggested.

The family of Julio A. "Terry" Taramasco created this Life Tributes page to make it easy to share your memories.

Send flowers to the Taramasco family.