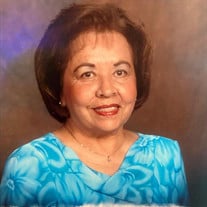 Julia Diaz Ortega was born on 11/14/40 in Las Palmas, Durango, México. As a small child, during the depression years, her family emigrated from Durango to Sinaloa, Mexico. They had to walk the whole trip and Julia’s dad would put her on her shoulders to cross big rivers, they would camp at night to rest. After many struggles and hardships, they traveled to Tijuana, Baja California Mexico Where they settled. And she would complete her education. She completed some first aid courses with the Red Cross. She had an interest in nursing. At 15 Julia met the love of her life, Cruz, at a family party. It was love at first sight and by the time she was 17, they married. They had 3 daughters, Martina, Aurora, Gloria and. In 1964 they came to Escondido, CA where Alejandro was born. They have lived in the area for 56 years. Julia was a wonderful wife and attentive mother and was involved in all her children’s activities. She became involved in teaching folkloric arts and formed a dance group where several families participated. Forming the first folkloric dance group in Escondido. She cared for her 10 grandchildren in a 30-year span. Julia had a creative side and for many years, she made crocheted scarves, ponchos, baby blankets, afghans, baby shoes, dolls dresses, and more. If you were her friend she crocheted something for you. Julia also enjoyed music, becoming an avid guitar and keyboard player because she loved music, arts, and anything that was folklore. Julia participated in the church choir for years. After all the children were grown, she and Cruz became faithful servants of the Lord and they became ministers in their Catholic faith. She was a catechist for many years and after that, she and Cruz were baptismal ministers for another 25 years. They were also involved in the marriage retreats and helped out couples who wanted to grow in their faith. One of Julia’s wishes was to go back to school and take more English courses which she did but due to Covid, had to stop. Julia was blessed to see 5 great-grandchildren: Diego, Marcos, Levi, Leon, and Westin. We have a large family and she loved all of her family, Julia enjoyed making special dinners to celebrate those special occasions. One of her favorite meals was made with posole. Julia will be truly missed

Julia Diaz Ortega was born on 11/14/40 in Las Palmas, Durango, México. As a small child, during the depression years, her family emigrated from Durango to Sinaloa, Mexico. They had to walk the whole trip and Julia&#8217;s dad would put her... View Obituary & Service Information

The family of Julia Ortega Diaz created this Life Tributes page to make it easy to share your memories.

Send flowers to the Diaz family.