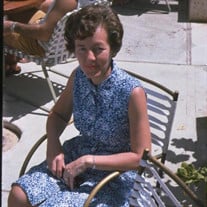 Juanita Moore Collins Smith Juanita Moore Collins Smith passed on January 31, 2016 in Escondido, California. She was born in St. Louis Missouri to William Stewart Moore and Hazel Elsa Moore on July 20, 1924. Juanita had a good life. She had three husbands: Barry Hyndman, Edward Frank Collins, and Donald Smith who each adored her in their own way. Barry brought the sports cars: Jaguars, Porsches and a Maserati, which passion she passed on. Edward brought a shared love for travel, domestic comfort and bliss and was her longest living partner, as well as a good partner in living well. Donald provided a happy home life in her elder years until their mutual disabilities interfered with their ability to go on. Juanita lived in several locales but she loved Westwood, California and served as an administrator and then a Registrar for UCLA. She loved UCLA and its campus life and sports, and spent decades there. Upon retirement, she and Edward moved to Escondido, California where she maintained a small but spectacular garden full of roses. She always loved her garden. She was also a ferocious bridge player and a good golfer, but these are other stories. Juanita was an avid traveler and visited 51 countries during the course of her life, which is an astonishing accomplishment. She was cultured, erudite, and more than a little adventurous. We the family cannot say enough in thanks to Juanita. Whether in support or in aid she helped to make more than one of us what we are today. Juanita suffered from dementia in her later years and this was a great pain to us. A disease which steals both mind and body. Juanita is survived by her twin sister, Gloria Donnell; her stepson Edward David Collins of Houston; her niece Susan Flanigan of St. Louis; her nephew John Donnell of North Carolina; and her nephews and nieces by marriage, Richard Collins, Lorilyn Teasdale and Janelle Teasdale of Oregon, California, and Washington State respectively. Her niece Heather Starr unfortunately predeceased her. In lieu of other gifts we ask that you contribute to the Alzheimer’s Association of America.

The family of Juanita Moore Collins Smith created this Life Tributes page to make it easy to share your memories.