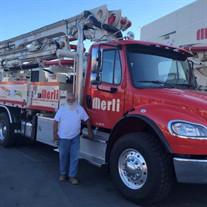 Juan "Johnny" Calicdan Caole Jr. July 12, 1937 – Nov 1, 2021 Johnny has left us, loving husband, father, grandfather and great grandfather. A friend without parallel, a great boss, a mentor to all. Johnny Caole came to San Diego in 1985 to start the San Diego division of Merli Concrete Pumping and quickly became an icon in the concrete construction world of San Diego, a legend in our industry, respected by all. The force in Johnny’s life was his beautiful wife Anita. He could come home every day, battered and beat up by his business and find love, peace and comfort at home with Anita and their rambunctious dogs Bailey and Patch. Their relationship was special, sharing the many fantastic times at their house with the Alpaca Farm in the backyard, and enjoying their vacation house at Havasu. Following Johnny’s passion, they were season ticket holders for the SAN DIEGO Chargers for 25 years, never missing a game together and in their incredible generosity, invited many family and friends to each game throughout the years. Johnny and Anita’s special passion was a date out together or with friends to some of San Diego’s finest restaurants. Johnny and Anita loved each other and their special relationship was evident to all. Born and raised in Bellflower, CA working on the family farm in the Bellflower/ South Gate area of LA County, where he learned from an early age the value of hard work. A graduate of Bellflower HS in 1955, he went on to serve in the US Army from 1960 until 1963. During the end of his time in the Army, Johnny served as a driver in the Base motor pool. His incredible mechanical skills and ability to keep a vehicle cleaner than a showroom model caught the eye of a 4 Star General who kept Johnny as his personal driver for the remainder of his service. Being the General’s Driver meant Johnny accompanied him to all of the General’s engagements, business as well as social. “That was a pretty good gig” Johnny once said. Coming home to LA County after the Army, Johnny worked in several industries, ending up working for the Merli’s in their Conveyor Belt division throughout Southern California, where his legacy grew. As a member of the Local 12 Union of Operating Engineers since 1960, has conveyed, pumped, or overseen and managed the placement of nearly 15 million cubic yards (11.5 million cubic meters) of concrete in the Western United States, primarily California, but also Hawaii. To put that in perspective, the Hoover Dam, consists of 4.36 million cubic yards of concrete. He has essentially overseen the pouring of nearly 3.5 Hoover Dams in his lifetime. Those were the figures when he was 82, two years ago. In 1985, when Johnny arrived in San Diego, The new Sheriff was in town. His knowledge of concrete placement, his work ethic and concrete experience set him in a class above all peers and he quickly established Merli Concrete Pumping as a force in San Diego. Driving through San Diego was a treat with Johnny, he could look at virtually every overpass, high rise, and warehouse and say “we did that one”. He wasn’t exaggerating! John Caole was one the toughest (and some might argue stubborn) men to walk the planet. Small of stature, he possessed incredible strength, easily making him a legend in an industry filled with hulks. His mechanical ability was without peer. He could walk up to a pump, listen for a minute or two and hear a noise nobody else could and fix the problem. His pumps were car show quality every time they went to a job, shiny, spotless- the pride of the industry. This was an incredible feat because every day these pumps had hundreds of truckloads of concrete dumped in them, a toxic environment faced every day. Johnny was different in many ways and left an indelible impression on everyone he met, and it seems EVERYONE knew Johnny. Gruff was an understatement when describing Johnny. So was family, loyalty, caring, humor, and an unbelievable knowledge of his industry. His beloved breakfast waitresses (breakfast of course was a daily occurrence), his employees, the young engineers on the numerous projects, the clients that he made lifelong relationships all knew this. He was different because he lived in a “No Bullshit” world. There was never much question about what Johnny thought about you- he would tell you. If you asked him a question, buckle your seat belt, you were getting and answer! Besides surviving a bridge collapse during one of his pours, he continued working until the very end, the day a group of his closest associates convinced him to get into an ambulance on what would be a one-way ride to the hospital, after having endured many weeks of aggressive Thyroid cancer, not wanting to miss a day of work. Unfortunately, he never returned from the hospital, passing away peacefully and comfortably less than a week later under expert care from the doctors and nurses at Palomar Medical Center Escondido. Johnny is survived by; His wife of 37 years, Anita. Children; Cheryl and David. (son in law); Lyons, Suzanne McGregor. Sons; Anthony Caole and Christopher Caole, and was met in Heaven with open arms by his beloved son Justin. Grandchildren; Amanda Lyons, Christopher Lyons, Jackson McGregor, Kylee McGregor, Shane McGregor, Nastasia Caole, Nathaniel Caole. Great Grandchildren; Lainey and Collin Lyons. His sister; Cindy Sexton, and her husband Mike Sexton. Johnny made a difference in all of our lives, we are all better for having him with us. Life should not be a journey to the grave with the intention of arriving safely in a pretty well preserved body, but rather skid in broadsided in a cloud of smoke, thoroughly used up, and totally worn out, and loudly proclaiming “WOW, WHAT A RIDE” We miss you and God Bless You. In lieu of flowers please make a donation to Gary Sanise Foundation in Johnny's remembrance.

In lieu of flowers please make a donation to Gary Sanise Foundation in Johnny's remembrance.

Send flowers to the Caole family.