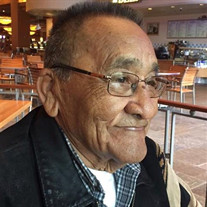 John Alonzo Rodriguez , 93, of La Jolla Indian Reservation cashed in his chips with the Big House in the Sky on March 7, 2019 at his home. John was born on May 16, 1925 on the La Jolla Reservation to Damascio Rodriguez and Juana Guassac-Rodriguez. He was preceded in death by his parents and his brothers, Alex and Peter Rodriguez. John attended and graduated High School from the Sherman Indian School in Riverside, Ca. He then enlisted in the US Army. During his time in the military he served in World War II. John has been stationed in the Philippines and Japan. His primary duty was serving as a Military Policeman. He used these skills when he returned home throughout his life as a peacemaker and mediator. Upon returning home to the reservation John married the love of his life Mary Guacheno from Santa Ysabel Reservation. They had two lovely daughters, Carey Rodriguez-Wolfe and Anita Rodriguez-Sanchez. During their time raising their daughters they were also raising 12 of their cousins; Betty Jean Vernachi, Patricia Rodriguez, Richard Rodriguez, Linda Banegas, Roberta Banegas, Velma Schlater, Carol Rodriguez, Wohlford Guacheno, Gary Guacheno, Michael Guacheno, Alvin Guacheno, and Wesley Ruise. The house was always full of children playing and full of love. John worked for many years as a Butcher at Melba’s Market in Pauma Valley. He was well known in the community and was always cheerful. John then began his own business in Pauma Valley, the “Casa Blanca.” His billiards, bar and grill became a well known hot spot in the Valley. John and Mary enjoyed many years running “the Casa.” He retired in 1973 and began enjoying retirement with his grandchildren, Jason Wolfe and Inez Sanchez-Pojas. His beloved wife went to be with the lord in 1991. He spent the remainder of his years with his family. He could always be found watching his great grandchildren’s sporting events. John is survived by his daughters, Carey Rodriguez-Wolfe, Anita Rodriguez-Sanchez, his grandchildren Jason Wolfe (Tiffany, spouse) and Inez Sanchez-Pojas (George, spouse), and his great grandchildren, Nizhoni Wolfe, Ethan Wolfe, Malaya Pojas, Faith Pojas, and the twins Nu$un and Mary Pojas; along with his godchildren, Brenda Guachino, Stanyla Guachino, Denette Romero, Annette Guachino, Velma Schlater and Brendine Parcell.

John Alonzo Rodriguez , 93, of La Jolla Indian Reservation cashed in his chips with the Big House in the Sky on March 7, 2019 at his home. John was born on May 16, 1925 on the La Jolla Reservation to Damascio Rodriguez and Juana Guassac-Rodriguez.... View Obituary & Service Information

The family of John Alonzo Rodriguez created this Life Tributes page to make it easy to share your memories.

Send flowers to the Rodriguez family.