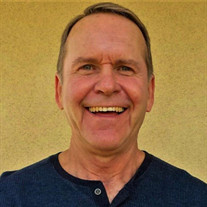 John Reth of Escondido, California passed away from a heart attack resulting from a weakened heart muscle due to immunotherapy treatment for nonsmokers lung cancer on Friday, January 29, 2021. Born in the state of Croatia, in the former Yugoslavia, on December 8, 1953, John (Ivan) immigrated at the age of 7 to the United States on the USS America via New York Harbor. He arrived with his father, mother, sister Martha and three of his four brothers: Miroslav (Fred), Edgar and Karl. The family settled in Cleveland, Ohio where John learned to speak English at school. When his father was granted a pastoral position in San Pedro, California, the family moved west. John attended La Sierra University and graduated in 1976 with a physical education major and biology minor. He taught subjects including PE, Bible, and Jr. High science at Escondido Adventist Academy for 11 years, from 1976-1987. Many of his former students remained close friends throughout his life. His hobbies included reading, hiking, cycling, making music, seeing movies, and he was always creating art in some form. In 1988, he spent the summer bicycling Europe with his brother Fred and nephew Jonathan, including a visit to his ancestral home. John was a multi-faceted artist and earned his degree from the Chicago Institute of Art in 2003. He also had a reputation as a skilled craftsman including building a canoe with his brother Karl. For the last 32 years, he ran his own business creating beautiful flooring designs for homes and businesses throughout the San Diego area, including for his home church. He brought his gifts and talents to everything he touched. He was active in the Seventh-day Adventist Church and continued in a teaching role there for an adult Sabbath School class until his death. John also enjoyed leading worship through music alongside his wife and dear friends. He lived his faith daily and inspired many in their own walk with Jesus. John is survived by the love of his life, Michelle, to whom he was married for 30 years. He was beloved by all who knew him and was known for his warm smile, great big belly laugh, gentle spirit and the ability to bring out the best in everyone he met. Well done, well done, my good and faithful son.... Matthew 25:23

John Reth of Escondido, California passed away from a heart attack resulting from a weakened heart muscle due to immunotherapy treatment for nonsmokers lung cancer on Friday, January 29, 2021. Born in the state of Croatia, in the former Yugoslavia,... View Obituary & Service Information

The family of John Reth created this Life Tributes page to make it easy to share your memories.

John Reth of Escondido, California passed away from a heart attack...

Send flowers to the Reth family.