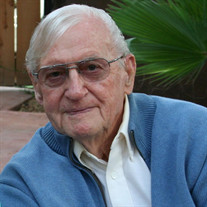 John Warren McQuead (Jack) was called to heaven by his savior Jesus Christ on April 15, 2015 in the early morning hours in the presence of family, in Escondido, CA. He was 90. Jack was born in Macomb, Illinois on November 29, 1924 to John Paul and Verna Ethel (Williams) McQuead. He was the only son of four children. His family moved to Joliet, Illinois. His parents divorced when he was quite young. Responsibility fell on him quickly thereafter. Like many others of his generation, his early years were shaped by events of the great depression. He went to work while still a boy setting pins at a bowling alley, and later working in a grocery store. He enjoyed the camaraderie of others in his neighborhood who became lifelong friends. He spent his summers on his grandparent’s farm near Rushville, Illinois, to the West of Springfield. It was there that he learned the necessity and value of hard work. He developed a powerful work ethic. He understood that quitting time was when the work was done. On Saturday afternoons, his family would go into town to barter for goods at the grocery store and trade farm products for staples. Often, on those days he devoured a bowl of ice cream. Throughout his life, ice cream was considered a special treat that triggered fond memories of his time on the farm. Jack met his future wife Isabelle Jean Pearson at her 15th birthday party when he was 17. They hit it off right away and stayed in touch while Jack was away during WWII In February of 1943, he joined the United States Navy. He completed Boot Camp at Great Lakes Naval Base in freezing weather. Subsequently, in full cold weather gear and with almost no change of clothes, he was put on a train bound for Miami, Florida and tropical heat! They all needed showers after that! Jack was sent to the Pacific Theater of War; he served as a Gunners Mate on a ship assigned to the island invasions across the Pacific. His work ethic from the farm served him well while on duty aboard ship. His time in service gave him great respect for the sacrifices of others: civilian and military. Not surprisingly, he came home with a sense of urgency about life. At the end of the war, Jack returned to his hometown and asked Jean to marry him. Jack loved Jean with all his heart. Jean loved Jack’s sense of humor and quiet manor and his commitment to their family. They were married in September of 1945. They would have celebrated their 70th wedding anniversary this year. Jack and Jean had four children: Cheryl Ann, Robert Alan, Michael Warren and Marsha Jean. Each of them embraced the values of their parents. Each of them invested their time and talents in the next generation. Jack worked multiple jobs for several years to pay the bills. He became a master carpenter and craftsman. He built houses with his Father-in-Law and learned from him. He acquired licenses in cabinetry and as general contractor. He took pride in his work and excelled at it. Along the way, the family moved from the Chicago area to Florida, then back to Illinois, then to Arizona, then back to Illinois, then finally to Escondido, California where they settled in December of 1959. Exposure to different building techniques in each geographic area taught Jack to look for options in developing solutions. Jack worked on upscale custom homes for many years specializing in remodeling. Eventually, he became self-employed as a general contractor. Along the way, he honored his commitments, did the work, and paid his bills. He under promised and over performed. He enjoyed running his own company. God led him in his career including a season of working for larger commercial building contractors as a superintendent and then as an estimator. He found this work to be very fulfilling. True to himself, on more than one occasion, he kept a subcontractor from making a costly mistake on a bid when he realized that could happen. He completed his career on individual projects and consulting on construction issues. He never looked back, always looked forward. Over time, he built a custom home for Jean with plenty of room and a view of the city lights. She loved having family over for holiday meals. An opportunity to return to Illinois and build a house for daughter Cheryle Ann Gray proved irresistible. This project gave Jack and Jean the chance to reconnect with family and long ago friends. He was a Christian man of great faith. He embraced those values every day in all things. In his life, he honored his commitment to his family through his marriage and in helping his children and others. He ended visits with each of his children with a hug, and saying quietly and privately to them, “Your mother and I love you, and we are very proud of you.” John Warren McQuead is survived by his wife, Isabelle Jean Pearson McQuead, his sons Robert Alan McQuead (Ann), Michael Warren McQuead (Melissa), and daughter Marsha Jean VanderSpek (James) and by his Son-in-Law Lawrence Gray. In addition, he is survived by many grandchildren: Jeffrey Gray (Joan), Eric Gray (Kim), David McQuead (Mara), Kevin McQuead (Lacey), Christen Freund (Eric), Richard VanderSpek (Carly), Ayme Pankratz (Dave) ,many great grandchildren and two great - great grandsons. He was preceded in death by his daughter Cheryle Ann Gray (Lawrence). In lieu of flowers please make financial donations to the global missions fund at Emmanuel Faith Community Church, 639 E. 17thAve. Escondido CA 92025 A Memorial Service will be held on Friday, July 24 at 1:00 pm in the Worship Center at Emmanuel Faith Community Church 639 E. 17th Ave. Escondido CA 92025 760 745-2541

John Warren McQuead (Jack) was called to heaven by his savior Jesus Christ on April 15, 2015 in the early morning hours in the presence of family, in Escondido, CA. He was 90. Jack was born in Macomb, Illinois on November 29, 1924 to John... View Obituary & Service Information

The family of John Warren McQuead created this Life Tributes page to make it easy to share your memories.

John Warren McQuead (Jack) was called to heaven by his savior...

Send flowers to the McQuead family.