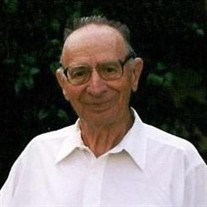 John Daniel McNerney, 93, of Escondido California, passed away peacefully on Sunday, November 12, 2017. Born on December 25, 1923 in Sharpsville Pennsylvania to James and Elizabeth McNerney he lived most of his life in Akron Ohio, Glendora California, Tacoma Washington and Escondido California John was a compassionate and caring man. Airplanes were his passion. He received his pilots license at 18 and flew in World War II. After the war, he received his Bachelors of Science in Aeronautical Engineering at the University of Michigan in Ann Arbor. Starting as a Blimp engineer at Goodyear in Akron Ohio, Jack had a long and successful career working for various aviation companies. In his spare time he enjoyed building model airplanes, painting and reading non-fiction books. Jack was a loving husband, father, brother, grandfather, and friend to all. He is survived by his loving wife of 63 years, Mary M. McNerney He was a proud father of his four sons and daughter, Thomas M. McNerney and his wife Kathryn Moorhouse of Sammamish Washington. Daniel E. McNerney of Omaha Nebraska, Steven A. McNerney and his wife Grace McNerney of Nevada City California, Patricia A. Davis and her husband Peter Davis of San Diego California, and Robert A. McNerney (deceased). He is also survived by his sister Jean Bresnahan of Niles Ohio, grandchildren Ian and Colin Davis, Samuel and Rory McNerney, Rosemary Villagomez and Antonio Sifuentes; as well as his many friends. There will be a Celebration of Life on Saturday, December 9, 2017 at 1:00 PM at the Redwood Terrace, Titus Hall, 710 W. 13th Ave, Escondido California.

John Daniel McNerney, 93, of Escondido California, passed away peacefully on Sunday, November 12, 2017. Born on December 25, 1923 in Sharpsville Pennsylvania to James and Elizabeth McNerney he lived most of his life in Akron Ohio, Glendora California,... View Obituary & Service Information

The family of John Daniel McNerney created this Life Tributes page to make it easy to share your memories.

Send flowers to the McNerney family.