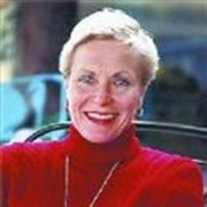 Janet Carol Houser passed away peacefully after a courageous battle with melanoma on November 11, 2013, surrounded by her niece Jennifer, and some of her closest friends, who loved and adored her. She was an inspiration to all with her strength, courage and positive attitude in the midst of adversity. Janet was born on December 4, 1939, in Kitchener-Waterloo, Ontario Canada to Karl and Ella Hoffman. Janet grew up in Kitchener and graduated from high school in 1957. She obtained a certificate of business in 1958. She then began working for a company called Hauser which manufactured patio furniture. Janet married in 1959 and emigrated with her husband to San Diego to begin the US operations of the family business. Hauser Patio and Rattan is still in business after 50 years. Janet was an essential part of the business. Her unique sense of style and sophistication was reflected in the furniture and accessories sold there. She became a US citizen in 1996 and retired from Hauser's in 2006. Janet loved animals. She was active in charitable organizations that brought a better quality of life to needy animals. She fought continually for spay and neutering programs. In addition to helping to find homes for abandoned animals, Janet sheltered and adopted many animals over the years. Animals gravitated toward Janet because they sensed her love for them. Some of Janet's fondest memories were her three trips to South Africa where she was able to see animals in the wild. Janet was preceded in death by father, Karl Hoffman; her mother, Ella Hilliard Hoffman; and her sister, Joan Hudspeth. She is survived by her niece, Jennifer Hudspeth and her partner Janine Henning of Kitchener, Ontario; two nephews, Scott Hudspeth and his wife Joan and their daughter Erin; David Hudspeth and his wife Debbie and their children Sierra and Samantha all of Kitchener. In addition, Janet's closest friends include Sandy, Ann Elise, Pam, Brian, Jane, Betty, Linda, Annie, Sharon Joan, Patti, Sabrina, Janathan and Richard. A very special thanks to Jennifer Hudspeth, Sandy Goldsmith, Pam Bills, Michele Taylor and Sabrina Gonzalez for all their collective strength, courage, and determination while assisting in Janet's final journey. There will be a Celebration of Life held in Janet's honor at her home on December 15, 2013 from 2 to 5 p.m. For more information please contact Janathan Allen at [email protected] . In lieu of flowers, donations may be made to the Melanoma Society, Humane Society, or the Animal Rescue Charity of your choice.

Janet Carol Houser passed away peacefully after a courageous battle with melanoma on November 11, 2013, surrounded by her niece Jennifer, and some of her closest friends, who loved and adored her. She was an inspiration to all with her strength,... View Obituary & Service Information

The family of Janet Carol Hauser created this Life Tributes page to make it easy to share your memories.

Janet Carol Houser passed away peacefully after a courageous...

Send flowers to the Hauser family.